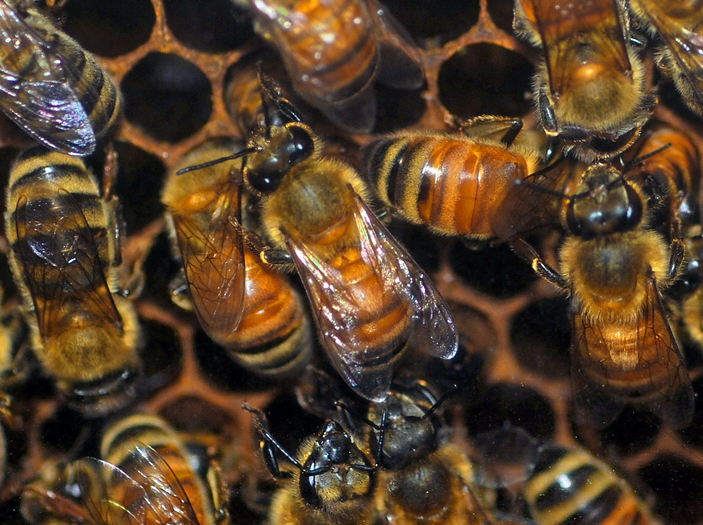 What’s the Buzz at QM?

Scientists at Queen Mary have made a ground breaking discovery investigating the behaviour of bees. Despite having a brain 5000 times smaller than humans, a study recently published in PLOS, links human learning with insects closer than ever. They have found bees having the ability to use tools to access food, and then being able to spread the learning across the colony. This is the first case of it being found in invertebrates.

How did they do it?

Pulling strings to access an award has been used in many previous studies to test the intelligence of animals. The team, led by Dr Sylvain Alem, used bright blue discs with a sugary reward in the centre as a comparison to flowers. These were placed underneath a small transparent table.

In the first group, 24 of 40 bees were able to be trained to pull on the string. This was achieved by progressively moving the flower and string at different places in the table. These bees were then labelled so they could be identified.

Using a group of 110 bees, the team investigated whether naïve bees (ones that had not seen how to use the string) would be able to access the sugar by pulling the string. Of the 110, 2 bees were able to solve the problem spontaneously. This indicates that without training finding a means to tackle a challenge is difficult and rare in occurrence.

Naïve bees were then allowed to observe the trained labelled bees pulling the string at a distance. Of the new set of naïve bees, 60% of them showed the ability to access the sugar by pulling on the string. The new skill was not based on insight but rather a series of trial and error attempts. This was seen with the naïve bees stopped pulling the flower if they could see no movement. The lack of this instant visual feedback was caused by the uncoiling of the string.

Could all bees do this?

The results suggest that the spread of a non-natural task can be learned through entire colonies of bees and without the initial trained bee after the skill has been passed onto another.

What is the significance of this?

It was previously thought that the use of mechanisms were set to complex vertebrates such as humans and apes. However, the study suggests that as long as an organism has a basic toolkit of learning processes, such as instant visual feedback, they are capable of spreading processes within large populations. Professor Lars Chittka, project supervisor for the research explained “we find that often, exceedingly difficult tasks can be solved with extremely simple neural circuits.” This creates questions about the evolutionary origins of this complex behaviour, suggesting that these skills may have been developed from an early ancestor and that the bees were not just winging it.