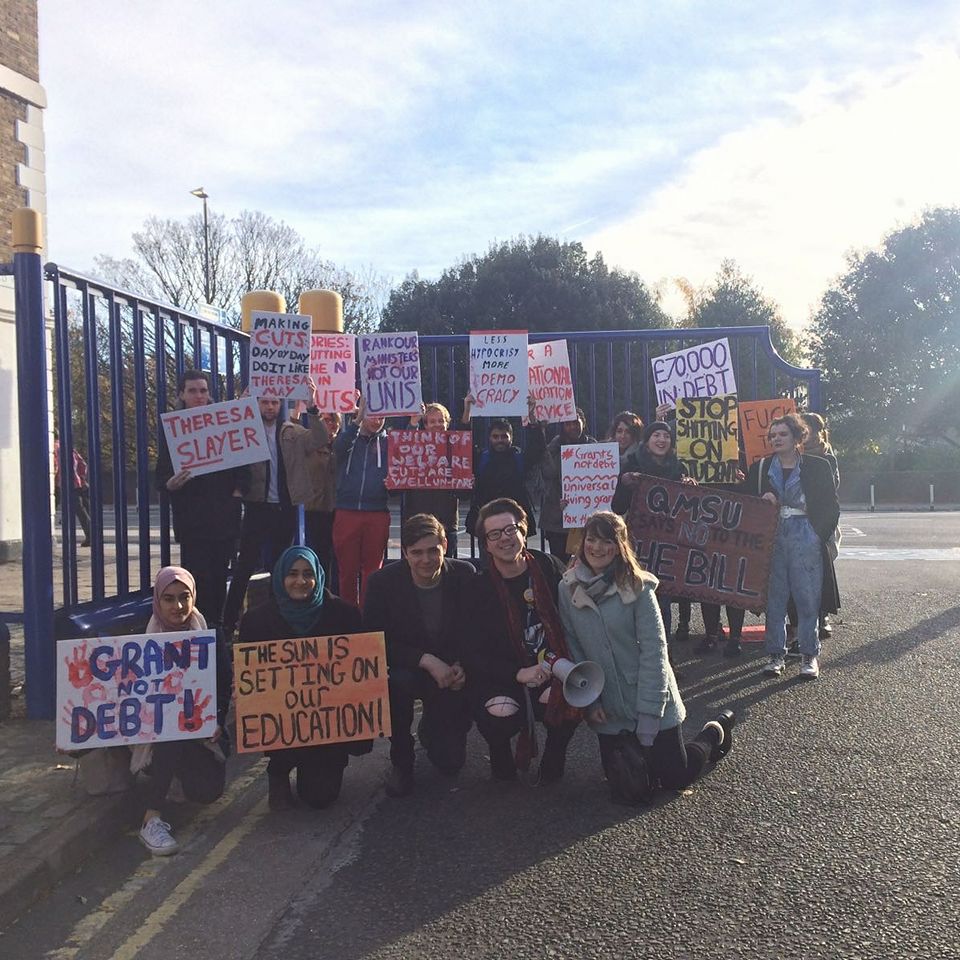 By Maariyah Dawood on 12th December 2016

Queen Mary students joined protestors in central London on November 19th for the ‘United for Education’ demonstration, organised by the National Union of Students (NUS) and The Lecturers’ Union, University and College and Union (UCU).

According to the NUS, 15,000 people marched from Park Lane to Westminster to demand a free education, more funding for colleges and better pay for lecturers and teachers. Students and university staff alike travelled from across the country to attend, with a group from Orkney beginning their journey to London at 4.30am the previous day.

The march culminated in a rally at Millbank, where the crowd was addressed by NUS officers, international students and trade union staff. Owen Jones, author and Guardian columnist, also gave a speech and called the government’s proposals for education ‘vandalism to an industrial level’. Although the demo was primarily about education, speakers voiced their concern for the rise in fascism, crime and the impact of Brexit and Trump, arguing that all these issues are linked and should be fought collectively.

QMSU prepared for the demo by organising a placard making party the day before, and sabbatical officers were also visited by NUS National President Malia Bouattia. The demo was also promoted at this year’s Freshers’ fair. Miranda Black, QMSU President, told The Print, “I was so happy to see students from QM join us, particularly first years. The demo highlighted a lot of the issues facing students today, such as the proposed reforms to higher education, which will damage education as we know it. Students are being priced out of education, new private providers will exploit students, and the proposed Teaching Excellence Framework not only uses flawed metrics but will encourage universities to cut corners.

“We’re being asked to pay more for our degrees and I think this creates more pressure to succeed. This not only puts a strain on students’ mental health, but also contributes to creating a cohort of students who are encouraged to compete rather than collaborate”.

Grace Halton, a first year History and Politics student told The Print, “I attended the demo because I strongly believe everyone should have a right to free education and that it’s important to challenge the stereotype of millennials not being engaged or aware of politics. It was the first NUS demo I had been to and I was impressed by the number of people, the creative placards, and speakers at the rally. It was a great feeling to end the march right outside Westminster where all the decisions we are fighting against are made”.

The demo took place against the backdrop of the third reading of Higher Education Bill in the House of Commons, which proposes several reforms for higher education. It includes the introduction of a ‘Teaching Excellence Framework’. This would measure teaching quality at universities using different metrics, such as the National Student Survey (NSS), which NUS have called on student unions to boycott. However, QMSU student council voted down a motion to boycott the NSS after a lengthy debate at the last meeting.