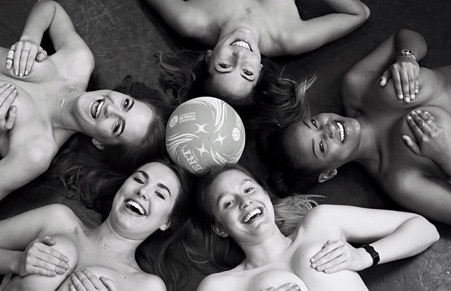 By Sophie Ogbonda-Jardine on 7th December 2016

Charity Co-Chair of Queen Mary’s Netball Team, Sophie Ogbonda-Jardine, talks to The Print about how the team are raising money with their new christmas calendar

CoppaFeel! is a breast cancer awareness charity aiming to spread boob love across the UK. After being diagnosed at the age of 23, CoppaFeel!’s founder, Kris, decided it was time to flip the switch on breast cancer awareness and bring it to the forefront of young people’s attention. CoppaFeel! aims to stamp out late detection and misdiagnosis of breast cancer by ensuring that people know the signs and symptoms of breast cancer, know what their breasts look and feel like normally, check them regularly throughout their lifetime and have the confidence to seek medical referral when they detect abnormalities. Currently 5% of diagnosed cases are already at stage IV with breast cancer being the second most commonly diagnosed cancer in women under 30 in the UK (181 new cases diagnosed and 12 deaths annually).

QM Netball Club’s charity chairs, Sophie Ogbonda-Jardine and Hannah Gaffey, have put on their ‘breast’ faces to lead the awareness and fundraising challenge for this academic year. Following on from the success at ‘On Wednesdays We Wear Pink’ session in Drapers, which has raised over £100, December marks the return of the charity calendar.

Our very own Netball Club’s (tastefully) naked calendar is available to order NOW online and at the SU Hub until December 15th!

You can also text ‘UBT QUEEN MARY’ to 70500 to sign up to your free monthly reminder to check your breasts (the first text will cost the standard network rate, but after this it is FREE – promise!).