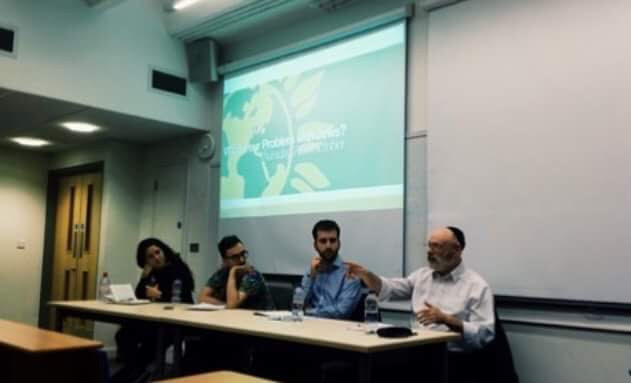 Anti-Semitism is Well and Truly Alive

Anti-Semitism is an issue we’ve all covered once or twice in history (or if you went to my school, every year in history class).

However there is one simple problem with this. It isn’t history. Anti-Semitism continues to plague the Jewish community both here in London and across the world.

The modern realities of the threat facing London’s Jews had never quite hit me until Queen Mary Young Greens and I visited the Jewish Museum London the day before we held a panel event on the problem within the Green Party and the British Left. Before even entering the building, security were present outside to greet and search visitors at the entrance, and the door had extra thick glass windows, which in turn had to be opened by another security guard inside the building. This level of security was much higher than any other museum of its size, highlighting the growing concerns over the safety of Jews here on our door step. Security at places of Jewish interest is being stepped up right across our capital.

This is why our event was a critical step forward in raising the subject of increasing anti-Semitism across the UK. According to Joel Salmon, the Parliamentary Officer for the Board of Deputies of British Jews, there has been a 33% increase in the number of reported anti-Semitic incidences since the Brexit vote this June. This is why, as a society we collectively felt the need to open up the discussion surrounding anti-Semitism, a move praised by Devora Khafi, the President of QM Jewish Society. “It’s great that the Young Greens, a non-Jewish student group have reached out to us to talk about anti-Semitism and we need more societies across universities to do the same and engage in dialogue surrounding this issue. We should be getting involved in far more inter-faith events and tonight has been a good step forward for all of us”, she added during her participation in the panel discussion.

Alongside Joel and Devora, we had contributions from the former Green Party spokesperson on equalities, Benali Hamadache, and local Rabbi, David Barnes. Together, our panellists outlined the problems facing London’s Jews and gave strong and credible solutions on how to eradicate anti-Semitism from British Politics and our communities. The problem is, people fail to recognise when they have said something anti-Semitic – and us ‘lefties’ refuse to accept criticisms of being discriminatory, because we simply can’t handle not living up to what we preach: equality. To truly begin tackling this issue head on, we must educate one another on what anti-Semitism really is. Only through inclusive, open education on religion and religious discrimination can we (whether that be the Green Party or the British public) educate our young people to accept and acknowledge differences that other people from different backgrounds have. And fundamentally, the Left needs to stop mixing anti-Zionism with anti-Semitism. A clear distinction must be set and reforms to disciplinary procedures within the Green Party and other political parties must be carried out to make them more robust and effective.