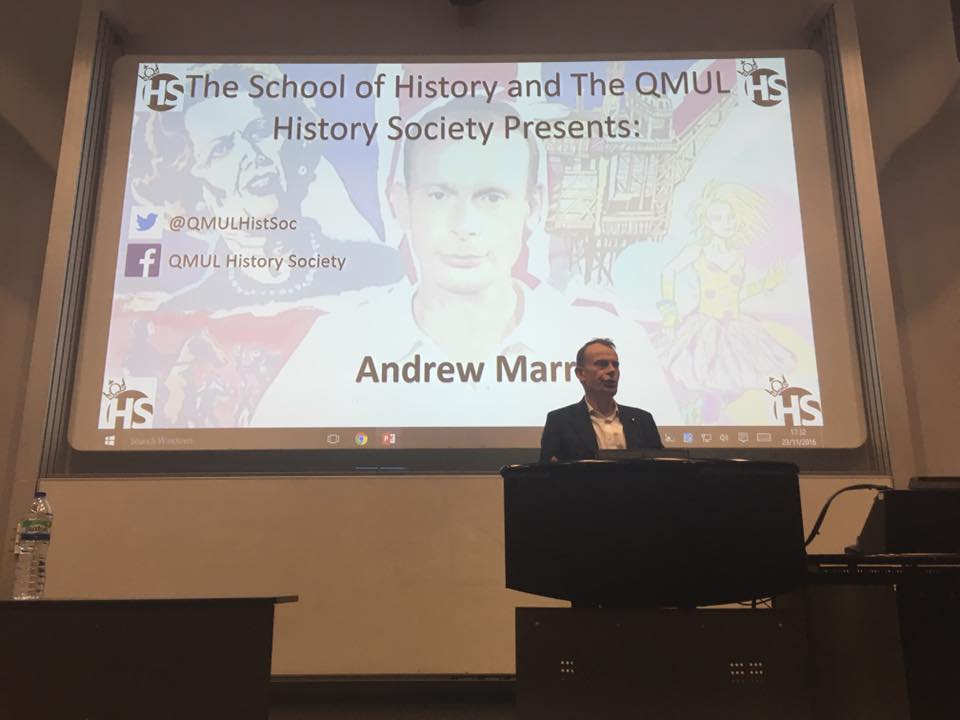 By Maariyah Dawood on 7th December 2016

Queen Mary History Society hosted ‘An Evening with Andrew Marr’ on Wednesday 23rd November, where the journalist and BBC host spoke to students about the current political climate and challenges.

The political commentator proved to be a popular guest with tickets for the event selling out within hours of release. Students gathered in the Arts Two lecture theatre to hear him deliver a talk largely about Brexit, the run-up to the referendum and the impact of the Leave vote, but also the international political scene, Trump and neoliberalism.

Marr, who has authored and presented history books and documentaries, said history was about ‘the important questions and conundrums’, with Brexit being the most important today. He said he called the referendum correctly because he left London to film and was outside the ‘Westminster bubble’, where there was a sense that the government and political class were part of a corrupt, incompetent elite. He described Brexit as a ‘fundamentally economic rebellion by the working classes left behind by capitalism, citing issues such as the MPs expenses, the hacking scandal and the 2008 financial crash as explainers, claiming the latter left an “…anger that burned on undetected under discussed”.

“The real question on the ballot papers was: are you really p***** off?”

Marr went on to talk about the Brexit negotiations, stating it will be “mind dazzlingly complicated” and claimed that the government is not being honest about this in public by giving empty statements such as “getting the best deal possible for the country”. He predicted the likelihood of a general election next year as he “can’t see how Theresa May can her version of Brexit through the Commons otherwise”. Whilst many are sceptical over a victory for the Labour party under Jeremy Corbyn, Marr suggested it was “completely possible in a time of revolt and rebellion”.

Marr, who is from Glasgow, also spoke of Scotland’s role in the Brexit process and expressed that Nicola Sturgeon has “a golden opportunity” to see Scotland as “a new U.K.”, that would leave the EU with the United Kingdom and reapply for membership as a separate country, and that Theresa May should not be dismissive of Scotland as she navigates Brexit.

The BBC presenter recently came under heavy criticism for interviewing Marine Le Pen, leader of the French far right party Front National, on his Sunday political programme. He addressed the topic that evening, stating that broadcasters were in a difficult position in distinguishing between real Nazis and racists from those who are against mass immigration. “If people are threatened by it, then it is dangerous for organisations like the BBC to label people racists and xenophobes”. He said he would never have someone advocating violence or hate speech on his show, but Le Pen and Nigel Farage “have never fully tread in that territory”.

The lecture was followed by a lively question and answer session, with many students eager to gain Marr’s insight in to issues varying from the parallels in the causes of nationalism between now and the 1930s, the role of centrist parties, identity politics, as well as his tips on getting in to journalism.

The History Society told The Print,

“We invited Andrew because he’s a big name and felt he would be best to comment on today’s politics with some historical context in light of his books and show. The event was our biggest of the year and we think it went great, considering the number of people who wanted to ask questions, and Andrew engaged with the students really well too!”