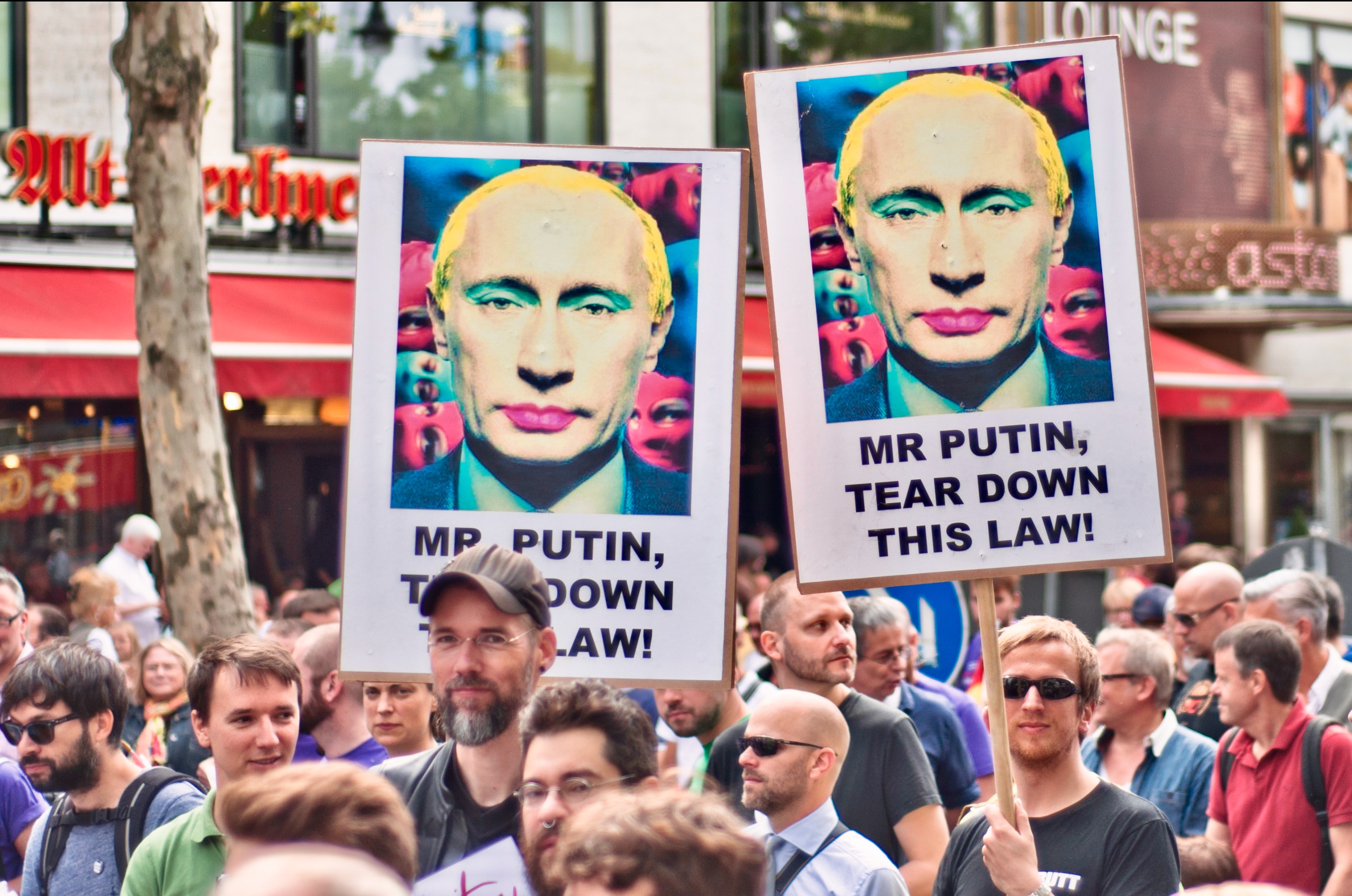 By Sophie Mitchell on 15th November 2016

The Print examines the current state of global human rights, encouraging students to get involved.

Many of us find it easy to turn a blind eye to current affairs; ignorance is bliss after all. But in today’s society, the world can’t move a muscle without it being splayed over TV, Twitter, Facebook, Instagram, etc. In one sense, this distracts us from the outside world – instead enveloping us in an artificial bubble that has full influence over our way of thinking. Although this level of social media involvement can be viewed as degenerative, it has some benefits. Due to this degree of societal involvement, it is now more difficult to walk around wearing a cloak of apathy. Instead, layers and layers of social media activity effectively wipe away any indifference – informing almost everyone as to what is happening on a global scale.

Police brutality, corruption, racial and sexual inequality are but few major issues facing the global force that is the USA. Whilst seemingly one of the most developed countries, both economically and socially, the states are not without fault. Over the past year, the ‘Human Rights Watch’ organisation outlined their concern regarding the “gulf between respect for equal rights and law enforcement’s treatment of racial minorities”, following the infamous killing of the unarmed black teenager, Michael Brown, carried out by a white police officer. Currently, the number of citizen killings at the hands of the American police force from June  2015 until now, stands at 664 – and counting. This number is staggeringly high compared to the USA’s rival in terms of social development; the UK. England and Wales, having a smaller population of approximately 56.9 million compared to the USA’s estimated population of 316.1 million, experienced 55 police shootings in the last 24 years. In the USA, 59 police shootings occurred in the first 24 days of 2015. These statistics illustrate the severe problem posing a section of the American police force. To this date, the USA have not established a clear database to record the amount of civilian fatalities caused by police shootings – this needs to change.

With a profound Soviet history weighing heavily on its shoulders, Russia today faces several social issues. One of which is their state of sexual and gender inequality. Currently, in Russia, same-sex couples remain excluded from the same legal protections that are available to opposite-sex couples. To exacerbate this, Russia has no existing laws or regulations to prohibit discrimination or hate crime regarding sexual orientation. As a result of this lack of legislation and slow pace of social development, the country has experienced a high volume of discriminatory crimes against the LGBT community. Whilst inequality reigns as a global issue, Russia particularly feels the impact of this prejudice; evident through the implementation of The Russian Federal Law “for the Purpose of Protecting Children from Information Advocating for a Denial of Traditional Family Values”. This governmental act is otherwise known as ‘the anti-gay propaganda law’, approved by the State Duma in June 2013. This clear perpetration against the human rights to freedom, irregardless of sex, gender or orientation. Russian President Vladimir Putin signed this outdated and socially corrosive law on 30 June 2013.

From a peaceful activist being detained for proudly brandishing a rainbow flag in March 2015, to  police detaining a gay couple for their ‘love wins’ flag in June 2016 – Russia’s grapple for sexual and gender identity equality remains a unsolved and turbulent issue. Yet, it is clear from Russia’s removal of homosexuality from the official list of mental illnesses in 1999, that the country is undergoing slow, but hopeful, LGBT rights progress.

The Human Rights Watch organisation has described the human rights crisis in Egypt as its “most serious in modern history”, but is perhaps one of the least publicly discussed issues. The human rights of Egypt’s citizens are at genuine risk. This occurred as a result of political turmoil repressing the basic freedoms and human rights of its citizens. Egypt’s status of leadership and power is un turmoil: Since the Muslim Brotherhood was ousted and Adel Fattah al-Sisi replaced Mohammed Morsi as Egypt’s president, the public have been rendered divided. Those who supported Mohammed Morsi have been subject to numerous attacks, and even murders, at the hands of security forces using violence to quell protests. A haunting example of this occurred in July of 2016, when a protest by supporters of ousted former President Morsi resulted in seven murdered, 260 seriously injured, and 400 arrested. Each being a civilian expressing their right to protest against their seemingly unjust leadership. Amnesty International sheds further light on this situation, claiming that “executions were carried out following grossly unfair trials; Detainees faced torture and other ill-treatment ‘…’ authorities arbitrarily restricted the rights to freedom of expression, association and peaceful assembly”. As a result of this conflict, approximately 400,000 civilians have been displaced; including 100,000 people living in the capital, Tripoli.

In wake of its recent Olympic spotlight, Brazil has gained global attention as a developing country climbing up the economic ladder. Yet, behind the golden light of the Olympic games, Brazil is undergoing a social struggle for the fair treatment of adults, and children, who experience imprisonment. In a country where torture is, as Human Rights Watch states, a “chronic problem”, the overcrowded prisons of Brazil breed violations against the human right to be free of torture. A darker light is cast upon this issue, as the Guardian reveals that approximately 20,000 children -undoubtedly more unrecorded – are detained in Brazil. The prominence of criminal gangs and activity in the country has led to the Brazilian prison population increasing by 161% from 2000 to 2014 to reach 607,000 inmates in June 2015. This mass of inmates are concentrated into dirty and unsafe prison facilities, built to cope with half the current number of inmates. The impacts of prison overcrowding are evident – with sexual abuse, violence, drug activity and disease plaguing the majority of the countries’ prisons. Rioting by inmates against Brazilian police officers is an increasing issue – yet the violation continues.

Perhaps one of the most chilling accounts of human rights violations manifests itself under the  term ‘child marriage’. A barbaric and outright cruel act – it was officially outlawed in India under British colonial tenure in 1929. This new law prohibited the marriage of a woman under the age of 18 for Hindis, Buddhists, Christians, and other religious sectors of India; excluding the Muslim community. India’s approximate 170 million Muslim population claim exemption from the law, due to their following of the personal Shariat Law. Despite the 1920 legislation, UNICEF’s ‘State of the World’s Children-2009’ report revealed that 47% of India’s women aged 20–24 were married before the legal age of 18, with 56% marrying before age 18 in rural areas. Evidently, the act of child marriage is often carried out discreetly between families and traditional groups, thus preventing the children affected from being helped by law.

Whilst preventable factors such as poverty, gender inequality and traditional practices act as the main causes of child marriage; the consequences are severe. The forced marriage of a girl in childhood marks the beginning of a cycle of degeneration: powerlessness, poverty, ill health, and restricted rights to education. The mental effects are evident, yet physical impacts of poor sexual health and a high mortality rate in childbirth serve to exacerbate this violation of human rights.

It goes without saying – the few current human rights violations mentioned here are by no means the most important, or most severe issues in the current global climate. If this article were to cover each and every country and their human rights violations – it would likely end up becoming a giant tome matching the proportions of the bible. Although this article covers only a small selection of current global issues, its role in educating and encouraging involvement is clear.

The first step towards global change is awareness.

If your moral conscience is now in overdrive regarding these issues, find out more and have your say here: