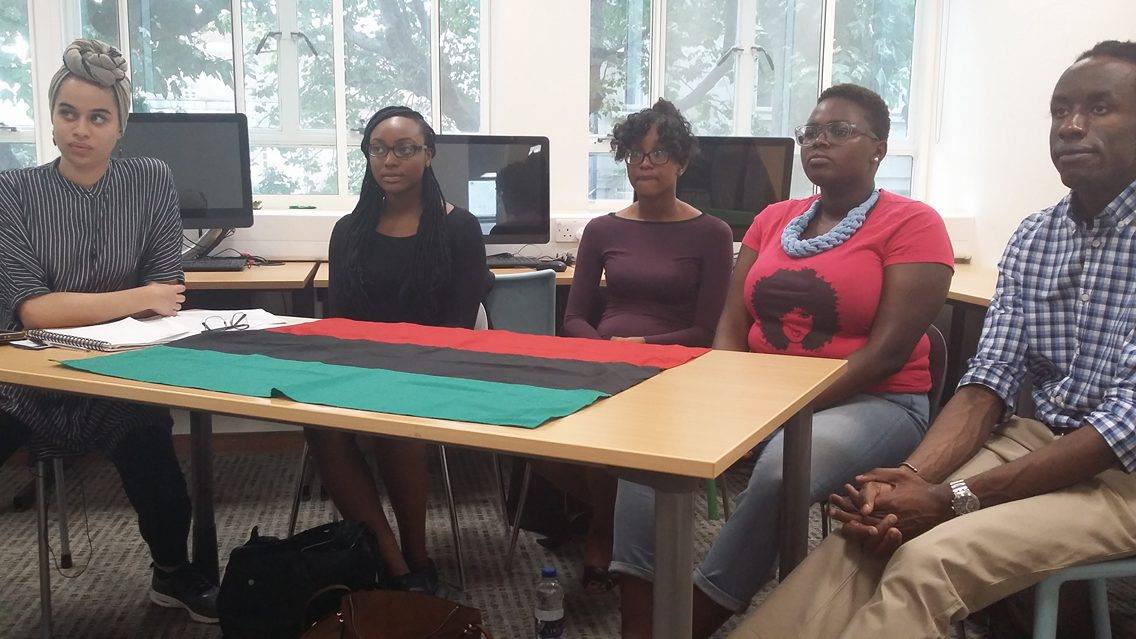 QM Pan-African Society and the Decolonising of Education Systems

By Elmira Tanatarova on 9th August 2016

The Pan-African Society at QMUL always puts on an engaging and interesting array of events and anyone attending their most recent talk was certainly not disappointed. In the small Study Room 9 of the Hive on our Mile End campus, big discussions were taking place.

In collaboration with students from Warwick and Goldsmiths university, the society presented a discussion on topics such as the decolonisation of academia, black history and may more. Taking part were director and producer Claudine Boothe, QMUL’s very own Aisha-Asher Morgan (president of the QM Pan-African Society), Dauda Barry (vice-president of the QM PanAfrican Society), Abisola Babarinde and Chenelle Shury (founder of the ‘Let’s Talk Black’ Society and president of African Caribbean Society respectively, both at The University of Warwick.) They were also joined by Andrea Thomas, an MA student of Black British Writing at Goldsmiths, University of London.

Boothe, having studied varying degrees across different universities, is known for her outspoken activism about the ideology of reparations and the treatment of Caribbean and African individuals in society. Her documentaries on the topic include Skin and Coal (1987), No Virginity, and No Nationality (1981). QMUL provided the setting for her latest project. At the beginning of the talk, Booth expressed that she wanted the discussion to be “informed but intense” and really adhered to that brief.

Chaired by Aisha-Asher Morgan, the discussion centred on the topic of decolonising education, focusing on four main questions:

Poignant and heartfelt, students from all different walks of life spoke about their battle of tackling a “Euro-centric curriculum” as people of colour. As on student said, “We don’t see much of ourselves in our curriculum”. The documentary discussion certainly opened this reporter’s eyes to the importance of seeing yourself in history in order to feel connected to the past.

Babarinde spoke poignantly of her own personal need to “unlearn” everything she had been taught about the history of African and Caribbean individuals, to erase the “victim narrative” their stories have repeatedly been echoed in. “Black people existed before slavery,” she exclaimed powerfully. “When you don’t feel pressured to think or feel a certain way, it is so much easier to learn” the students candidly agreed.

The significance of methodology also made for compelling discussion.  “We look at the symptoms, not the roots…” one student commented, pointing out the importance of not simply treating the “cough” but getting rid of the “infection” altogether.

Students also spoke of the rights of former colonies to have reparations.  Currently, fourteen former French colonies pay a colonial tax to France. What is an extremely delicate and sensitive topic was handled with maturity, courage and, at times, humour by all who took part.

Applauded by everyone who witnessed the discussion, the students were told by Boothe herself that their stories and debates would serve to drive the narrative of her ﬁlm along. She has high hopes that the film will be displayed at various film festivals. Though the cameras have stopped rolling I am sure that the debate will not.