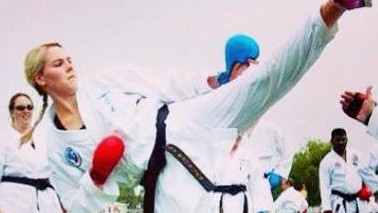 THIS QM GIRL CAN: An Interview With Kate Karwacinski

Queen Mary Masters student, Kate, talks about musical passions, coaching younger aspiring fighters, and the dedication needed to study Law alongside being in the England Karate team. This QM girl certainly can.

When did you start playing karate?

When I was about 6 just at my primary school and then I started competing at about 12 or13. Then I was selected for the England team at 14 and I’ve been in the team ever since. My twin brother who used to go to Queen Mary and my parents both do karate too.

You instruct people too?

Yes, I’ve got my own club now back in Essex. At the moment, it’s only been around for a couple of years so it’s up to 12 years old. We’re teaching 4-5 year olds as well.

Do you have any passions outside of Karate?

I’m really in to music. I’ve played musical instruments since I was about 6 or 7. I’m grade 8 on the flute, grade 8 on the double bass and I sing. I’ve been used to balancing everything from a young age.

What do you see in your future?

I’m hoping to go into law because karate isn’t an Olympic sport at the moment. Thinking about career prospects, there’s not a huge calling, unless you go into full time karate teaching which I’d love to do but then again, I love law. So that’s the aim and to do karate on the side.

What do you think of the This Girl Can campaign?

I absolutely love it. I think it’s fantastic, especially in my sport. I think over the years, as a girl myself, the sport has given me so much confidence particularly with self-defense. I think generally, sport for girls is a fantastic thing to get involved in and should be pushed more.

With men it’s a lot easier to get involved in sports. Maybe women feel with particular sports that it’s not ‘girly’ or it’s just a male thing. But women can be just as good as men.

What are the positives of taking up karate for women?

Well I’m going to be very biased. From a young age, or even when you’re entering into your teens, what it gives you confidence-wise is phenomenal. It just translates into your everyday life too such as commitment, fitness, keeping healthy, keeping up an active lifestyle. And with karate, there’s the whole self-defence aspect; being able to protect yourself, just being confident in that. As a woman, I think that it’s something that everyone should have.

So, Jessica Ennis-Hill has always been an inspiration. Athletics isn’t dissimilar to karate in the dedication. What she has achieved as a woman: she’s had a family and still managed to come back and still keep that mindset. That makes her a great role model.