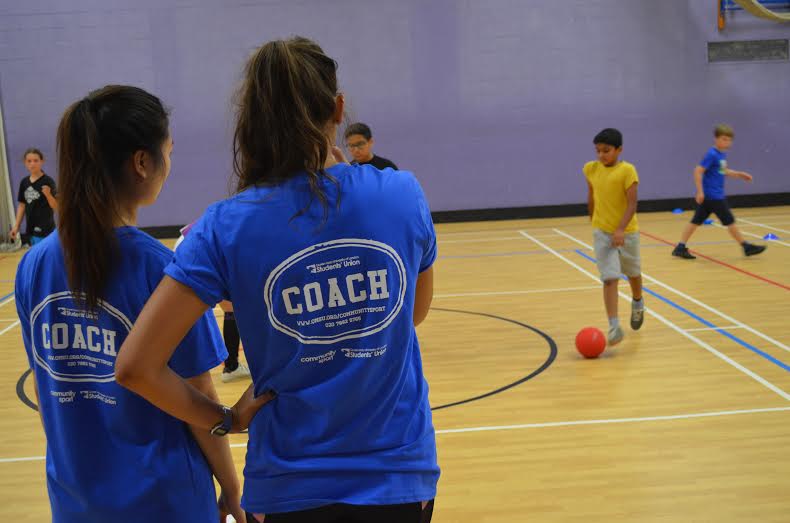 QMSU: Bringing Sport to the Community

By Michael Barraclough on 2nd February 2016

QMSU Community Sport aims to increase activity levels within Tower Hamlets by using our students as sports coaches and officials. Since August 2013, they have trained 90 students and facilitated over 1000 hours of sport in the borough.

Over the last few weeks they have overseen a number of local events, working with student groups and sports clubs to offer new opportunities for the local community to become more engaged in sport. Through the Annual Fund, the men’s rugby and football clubs have both organised events with local schools.

QMRFC, in partnership with Community Sport, the RFU, and East London Rugby Club, delivered four weeks of tag rugby coaching within local primary schools, culminating in a multi-schools’ tag rugby tournament on 23rd October. The Olympic Stadium in Stratford hosted games in the recent World Cup at a perfect time to raise money and the sport’s profile in the local community – after all, it’s one that typically does not attract much attention in East London. During the tournament, RFC witnessed 10 schools and over 100 pupils, many of whom had never picked up a rugby ball before, take part in a thrilling competition, which is bound to have whetted their appetite for the game.

The fantastic standard of rugby on the pitch was a testament to the hard work put in by QMRFC and their achievements have been country-wide. Media crews from Sky Sports, the RFU and ITV were all present at the RFU’s Festival of Rugby, linked to the aforementioned recent World Cup.

The star of the show, however, was RFU President and World Cup Winner, Jason Leonard, who greeted the teams on arrival, taking photos with each school and their QMRFC coach.

To ensure that the momentum gained by this event was not lost, each child received an invitation to a continuation day at East London RFC so they can continue to play rugby regularly. It is hoped that the efforts of the QM players and coaches will result in an increased numbers playing rugby in Tower Hamlets.

The men’s football team have also been working on a similar initiative of late. QMFC and QMSU Community Sport, funded by the FA and Sportivate, have recently partnered up with both the London FA and West Ham United Foundation to provide more opportunities for community football within Tower Hamlets. The first event to take place under the new arrangement was a 7-a-side football tournament for year 8 boys, which took place at Victoria Park on November 5th. The event saw 51 boys come together to play football but also to hear about university life. Proceedings were supported by QMUL’s Widening Participation team, which enabled the club to discuss the routes to and perceptions of university and to generally promote higher education.

Harry Madgwick, President of QMFC, said: “QMUL has strong links to the community in the borough and it was great to chat to the younger generation to explain more about the benefits of university and university life. The day was a real success in the end and hopefully we’ll see some of these boys at QMUL in the future.”

Six teams took part in the competition and after numerous dramatic matches, Newham College were crowned champions. A tense final ended 0-0 but they held their nerve during the ensuing penalty shootout and consequently lifted the title.

The funding provided by the FA has enabled a lasting commitment to be made by QMSU to the community. Free coaching sessions, delivered by West Ham Foundation coaches, take place for 16-25 year olds on Friday afternoons at the AstroTurf in Stepney Green park between 4-5pm. Anyone can turn up, with men using one half of the pitch and women the other.

It’s been a great few weeks for everyone involved and the rest of the year promises to be just as exciting, but QM Community Sport need your help! Research conducted by Sheffield Hallam University in 2013 found that 94% of employers identified a clear link between sports-related activities and essential skill development, crucial for future employment.

Find them on Facebook, Twitter or pop down to QMotion to get involved in helping bring sport to the masses in Tower Hamlets.