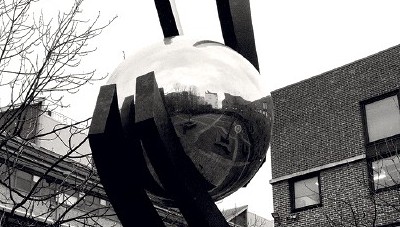 I spy with my little eye something not so little beginning with K: ‘Knowledge’.

Knowledge may often seem to be as elusive as the silent K. When former Principal Graham Zellick realised Library Square needed reinvigorating, he commissioned Wendy Taylor CBE, who made the concept tangible. A sixth-generation Eastender, Taylor has been credited with probably having more permanent public sculptures than any contemporary and is a Fellow of Queen Mary. Her work features throughout the UK, part of her mission to ‘take art out of the galleries and out onto the streets’. ‘Timepiece’ on Tower Bridge stands out: elements were transformed in terms of size and character as the chain, once flexible, was stiffened as support.

‘Knowledge’ started in 1998 and was unveiled by Lord Jenkin of Roding in 2003. There were a couple of hiccups, like the service of drain-pipes underneath the chosen plot. When steel-spinning the sphere, it flared into a flying-saucer shape; excess had to be hand-ground, partly with a stone wheel, to produce the perfect orb. Transporting the sculpture also proved challenging: a looooong lorry conveyed it to the Lock Keeper’s Cottage, significant for Taylor prior to ‘Knowledge’. In an interview, she imagined how amused her grandfather- former lock-keeper of the very same house- could have been, watching the tremendous artwork pass by. Thanks to patronage from the Westfield Trust; the Linbury Trust; Trusthouse Charitable Foundation; Ernst & Young LLP; Laing O’Rourke PLC; Lord Jenkin of Roding and Queen Mary and Taylor’s talented team, it was installed. Unsurprisingly, ‘Knowledge’ was born of labour, spirit, patience and support.

Many may wonder, like English student, Abbie Jukes, ‘what it is or why it’s there in the first place’. Its central globe defies its static state, reflecting the students who motivate the motion of learning. It has been lovingly referred to as The Golden Snitch, fitting for ‘we seekers’- ahem- ‘of knowledge’ (Friedrich Nietzsche, Genealogy of Morals). According to Taylor, the stainless steel arms stretch towards campus’ geographical heart, the Octagon. Potentially, it symbolises the art of balance, which once achieved can animate one’s potential. Situated outside the library, ‘Knowledge’ hints we will find balance and be empowered via this fort of fact and fiction. Rather than orbiting knowledge- tempting with the sculpture- we must pursue and peruse.

English student, Lorenzo Sallows, believes it is ‘indicative of the relentless quest for knowing’, ‘charged’ by the reflections of ‘thousands of studious faces’. Tom Spencer, English and Drama student, remarked: ‘I like anything that shows me my own face. No, but seriously, I quite like it.’ These varied critical approaches illuminate the importance of gaining worldly- and self-knowledge.

But do we really need to be reminded of the importance of Giants of Existence like Time and Knowledge? Rather than submissively enshrining them, Taylor seems to rebel, using art to assert Humanity as an equal qualified to handle these forces. ‘Knowledge’ is proof, a literal tour de force humaine.