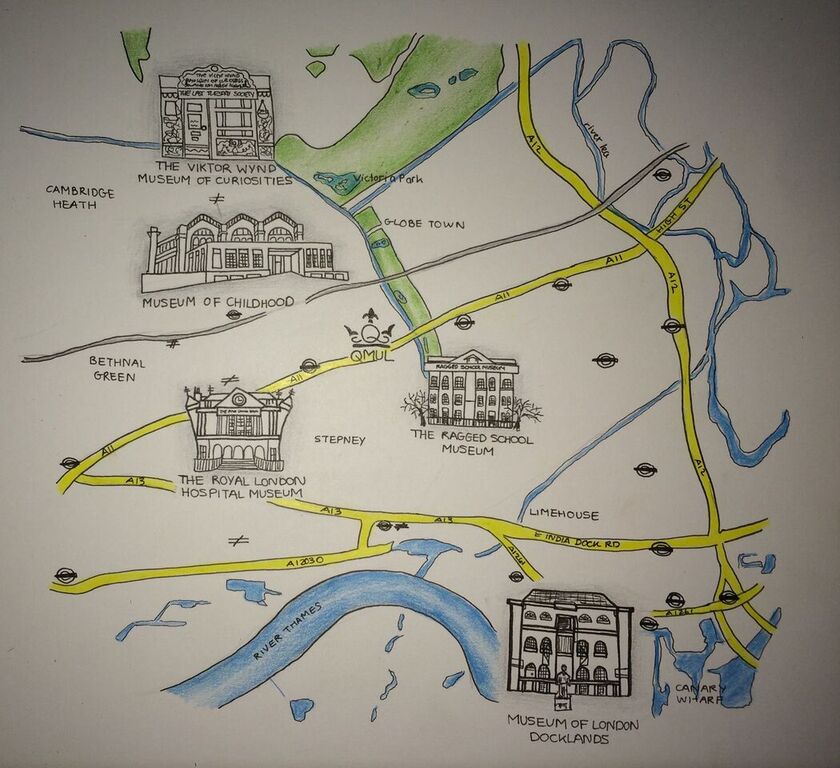 Night (and day) at the Museum

The Print takes you on a tour of some of our local must-see museums.

Even if it’s your first year here at Queen Mary, you’ll be used to the eclectic historic past of the East End by now. However, what you may not know is that the area is also absolutely teeming with museums, and some on areas of history you won’t have even heard of before.

Starting down at Bart’s Whitechapel campus, we have The Royal London Hospital Museum. For those who know the campus well, it’s in the same building as the library, but for anyone who isn’t too familiar, it’s signposted once you get near the hospital so it’s not too hard to find! This was the smallest of the museums I visited and I couldn’t believe I’d never been in before. It’s full of numerous medical artefacts and has also got facilities to watch a number of short films. Some of the most interesting sections included a case about Joseph Merrick, otherwise known as the Elephant Man and a section about nursing, focusing on Florence Nightingale. It’s really interesting to see how much medicine and dentistry, and the hospital itself, has changed. The museum has free admission and is open from Tuesday to Friday, 10am-4:30pm.

Walking straight up towards Bethnal Green, you’ll come across the well-advertised and notably large V&A Museum of Childhood. It’s open from 10-5:45 daily, and admission is free. If you have younger brothers or sisters visiting you at uni, or you want to get your parents repeatedly saying “I had one of those”, then this is the place for you! They have displays of toys from around the world, and from different time periods. These range from impressive and intricate dolls houses to very modern Barbie dolls. There is also a large number of interactive displays, and the special events are really worth going to. I went to a Jaqueline Wilson one in the past and even saw Nick Sharratt appear, but currently on is an exhibition about Britain’s child migrants, and starting in March is an exhibition about The Clangers, Bagpuss and Co.

Walking along towards Victoria Park is the Viktor Wynd Museum of Curiosities. Words do not even begin to describe this place as it is undoubtedly one of the weirdest collections of object you’re ever likely to see. The museum is open from Tuesday to Sunday from 11am-10pm – this is the only museum on the list that you have to pay entry for, it’s £4 each, but included in that is a cup of tea or coffee, and it’s definitely worth the money! Plus it’s open until late, they often have special events, and they serve cocktails! The museum itself hosts so many different objects, it really has to be seen to be believed. Taxidermy animals, Russel Crow’s (sic) piss (allegedly), animal penis bones, Russell Brand’s pubes (allegedly), a mermaid skeleton, used condoms (reportedly from the Rolling Stones, among one of Wynd’s own), you name it. Not for the faint hearted but honestly worth a look for anyone wanting to do something a bit different. Also for any fish tank enthusiasts, the one in the café is worth a look and I could have quite easily spent all day in front of it.

Following the canal down, and just opposite the Mile End Leisure Centre is the Ragged School Museum. It’s free admission and open on Wednesdays and Thursdays from 10am-5pm, and the first Sunday of every month from 2pm-5pm. Based in three canal-side buildings that used to make up the largest “ragged” school in London, this museum is based on the history of Doctor Barnardo, the working class East End, and Barnardo’s Children. The museum hosts an authentic Victorian classroom and a Victorian East End kitchen. It’s another interesting place to take children, but there is also a wealth of information for anyone interested in the local area. It also has some objects currently on loan from Queen Mary, and the people working there are incredibly friendly and knowledgeable. Although it focuses on the school itself, there is a lot about the general history of the local area, including objects and themed information boards, looking at different aspects of East End history.

Further down the canal towards Canary Wharf, and sandwiched between a Cineworld and a number of DLR stations is the Museum of London Docklands. Open 10am-6pm daily with free admission, this is an incredibly hidden, but hugely expansive museum, detailing from when the docks were set up, right up to the present day. The inner galleries are absolutely huge, and range from information plaques to a recreation of a Victorian street, to bomb shelters, to films – they’ve got something for everyone. Sailortown was a personal highlight – it’s a full-size reconstruction of Victorian Wapping with buildings including a shop selling wild animals, a chandlery, an alehouse, and many more. They even have sounds playing throughout the museum, so if, in the Docklands at War section you suddenly hear a group of people whispering “loose lips might sink ships”, don’t jump out of your skin like I did. This museum is certainly a hidden gem, again, the staff were welcoming and had plenty of information should you have any questions. Of all the museums, this was probably the most expansive, and definitely worth a day visit.

Overall, make the most of your time here! There’s so many museums and things to see or do, there’s something for everyone. Don’t just save it for a special occasion either, if you’ve got a spare afternoon, or even fancy tackling all of them in one day, there’s always something new to do in London.