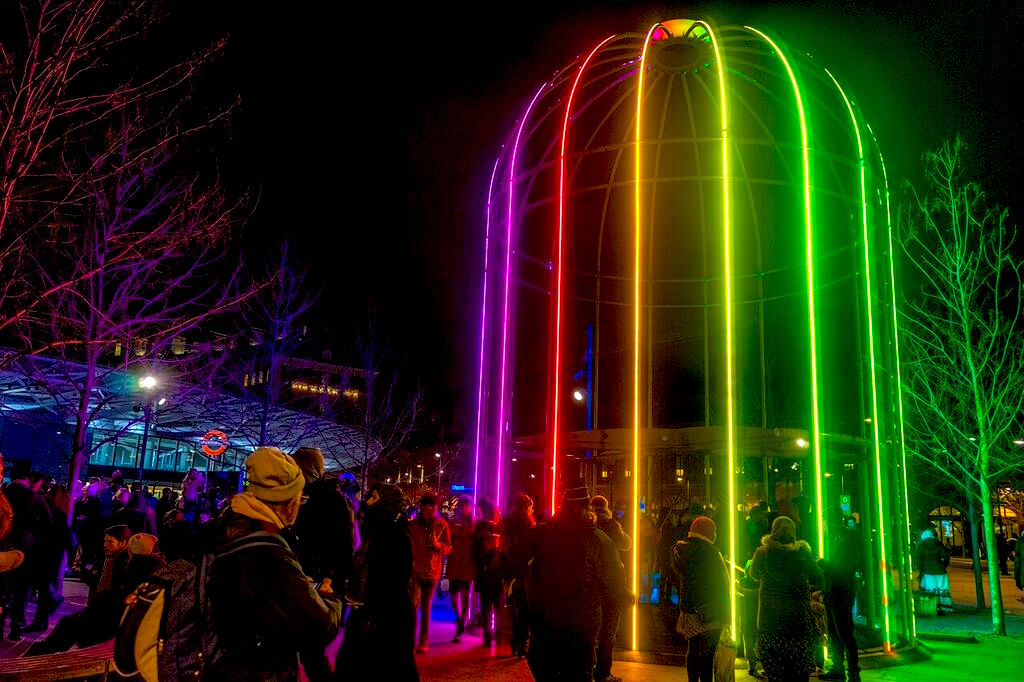 Let There Be Light!

London became a dazzling art exhibit as it lit up for UK’s largest light festival, Lumiere, which transformed iconic landmarks into captivating installations. On the weekend of January 14th, thirty international artists painted the town in neon hues of spectacular lights in Mayfair, Trafalgar Square, Piccadilly, and King’s Cross. The heart of the capital metamorphasized into a riot of imagination and bursting colours, and Londoners of all ages were enthralled by the reimagining of their city.

Artichoke, a creative company specializing in outdoor events, organized Lumiere in the effort to banish post-holiday blues by bringing physical and metaphorical light to the winter gloom. The installations were a delightful reprieve to the suffering of festivity withdrawal, as the enthralling lights were a welcome sight after the removal of glittering Christmas décor.

Lumiere was a success in numbers, luring over a million couples, teenagers, and families out of their cosy homes and warm pubs. For four nights, London’s busiest streets were shut down to allow pedestrian access to the exhibits. It was no small feat for the transportation sector to close down roads, buses, and keep the congested tube lines functioning, and despite the meticulous planning preceding this event, they struggled to control the chaos at times. At one point, King’s Cross was so over capacitated that it was evacuated, and some installations were switched off on Saturday night due to excessive crowds.

Artichoke was clever enough to arrange the exhibitions far away enough to control foot traffic, but they were within a walkable distance. Thus, Lumiere-goers set out on an exotic scavenger hunt throughout the city-turned-gallery. Despite the obnoxious elbowing and uncomfortable shoulder-touching, there was a unique atmosphere of unity as everyone marched along the same paths, simultaneously stopping to marvel at the artwork.

French group TILT brought the Garden of Light to Leicester Square, where people strolled through an exotic garden of enormous glowing foliage and flowers, reminiscent of a tropical summer’s night. Over at St. James, throngs gazed up at the spectral human forms flying over trees and nonchalantly perched on top of buildings, which were the works of Cédric Le Borgne’s Les Voyageurs. Westminster Abbey was given a digital makeover after French artist Patrice Warrener painted it with electric lights in The Light of the Spirit, as its façade glowed with four neon hues. 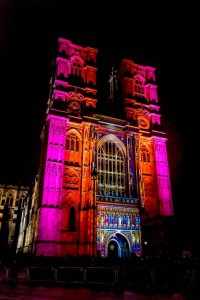 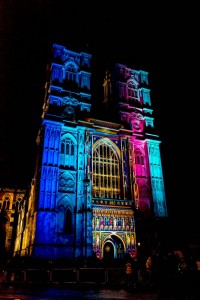 A few exhibits utilized the light properties of recyclables to create celestial displays. Mick Stephenson’s Litre of Light featured water bottles repurposed into light bulbs, which were filled with bleach and colored by local schoolchildren, thus amplifying the light source. This installation portrays the potential alternative technology has to change the lives of thousands, and the masterminds behind the project, MIT’s Alfred Moser and his students, have brought this idea to developing communities in desperate need of resources. 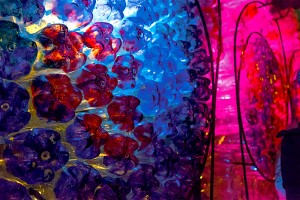 Another proponent of the eco-conscious movement was Plastic Islands, which filled the glowing Trafalgar Square fountain with thousands of recycled plastic bottles donated by Londoners, creating an island of garbage in the center of London’s historic square. The thought-provoking piece invites viewers to interpret it both politically and economically.

Certain displays were especially appealing to children, such as Jacques Rival’s IFO (Identified Flying Object) right outside King’s Cross Station. The now-permanent neon birdcage invited the crowds to play on the swing inside, and a queue of giddy children can be seen at all times of the day. Above Regent Street, a moving elephant trumpeted realistically; and on the other side in Air Street, his bum swung cheekily as he ambled away.

Some installations were more challenging to view than others. Those who were lucky enough to navigate through the throngs could catch a glimpse of Gilbert Scott’s defunct telephone kiosk, which was charmingly converted into a glowing aquarium with neon fish, encapsulating viewers with its optical effect. Tae gon Kim’s Dresses were created out of fibre-optic LEDs. Though stunning, the small size and tricky placement allowed only fleeting glimpses through the masses.

Binary Waves by Lab[au] proved to be rather underwhelming. Mirrored dramatically by the waters of Regent’s Canal, 40 rotating panels glowed with moving red lights in an indecipherable pattern. Onlookers eagerly anticipated a climax, but none came. It is only upon research that one can realize the red lights are actually representative of electromagnetic waves throughout the city, which might have been more interesting if it was clearly conveyed through a written description on site.

The most favourable installations combined light, movement, and sound, such as Porté par le vent’s Luminéoles. Floating above Piccadilly were three massive tropical fish lit from within its delicate, papery material. They moved and dance to the ethereally haunting music, and onlookers were transported into “Spirited Away”-esque scenes. It was a definite favourite amongst the crowd, as both adults and children were seen gazing upwards, unmoving and jaws slacked. 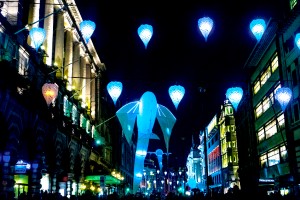 Another dramatic installation was Spectra-3 by Field.io, which vaguely resembled a human-to-UFO communication device. The mirrored radar dish swung in 360 degrees, projecting abstract designs that complemented the futuristic sound effects. The eerie display was undoubtedly riveting, but it struggled to compete with background noise and surrounding abstract architecture. Had it been located on an isolated hilltop, or in complete darkness, it might have better achieved its intended effect.

Due to the eclectic range of artists, the lack of coherent narrative in Lumiere proved problematic for some, as there was nothing to connect the scattered exhibitions. However, this can be appreciated as a novelty, as each exhibition became a separate entity to be interpreted individually, sharing only the medium of light. Still, there’s no doubt that one of the most anticipated events of the month was satisfactory for the majority of its attendees, and the success of Lumiere’s first event in London lends us hope for its future events.