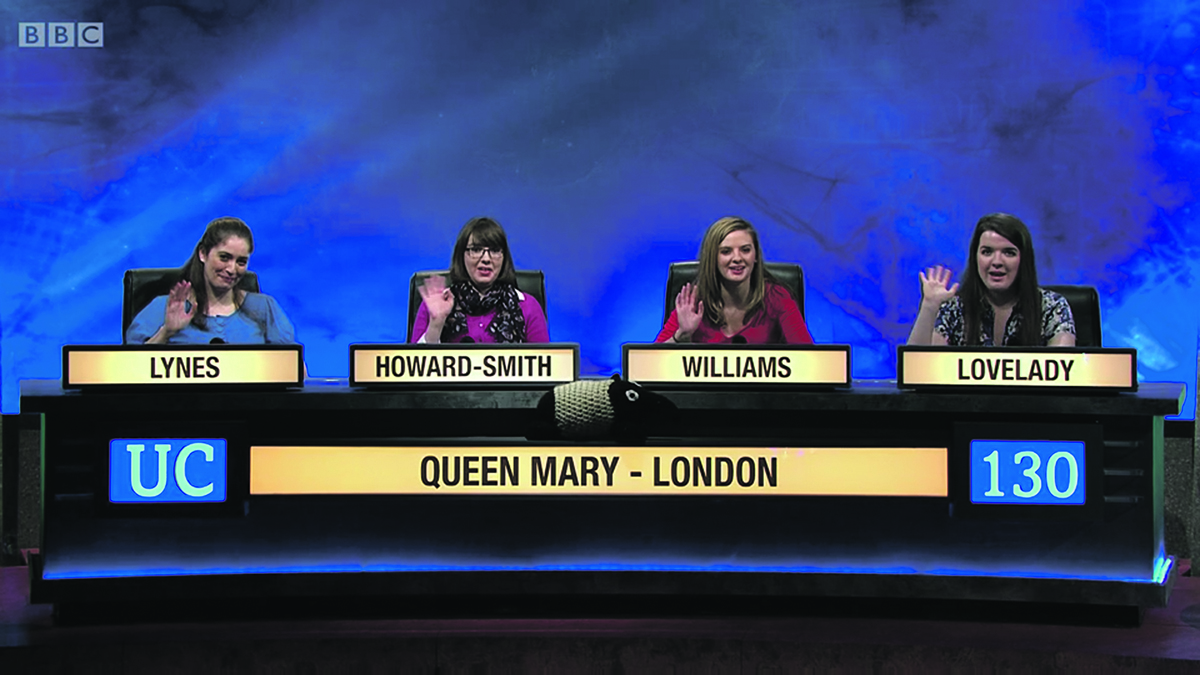 By Lucy Sofroniou on 7th January 2016

Nuffield College may have won the legendary academic quiz show, but QM certainly won over twitter

The penultimate first round match of the popular academic quiz show, University Challenge, saw an all-female team fly the flag for Queen Mary, University of London.

Kate Lynes, Stephanie Howard-Smith, Verity Williams and Yolanda Lovelady took to our screens on the 5th of October to compete on an intellectual battlefield against students from Nuffield College, Oxford.

Queen Mary had begun on a positive note after correctly answering a question on the US sitcom Friends. The picture round presented the contestants with the names of Britain’s best-loved novels.

After questions ranging from types of rain, to rugby and the world of Classical Civilisation, Queen Mary and Nuffield College appeared to be on an even playing field. The latter part of the show had both teams on a score of 110, until the end where Nuffield won 165-130.

Though Nuffield College may have proven victorious, Kate Lynes made headlines and caused a flurry of tweets from amused viewers over her studies in Sphincter Preservation.

Dr. Norman Williams from the Centre of Academic Surgery at QM, has responded by emphasising that sphincter preservation plays a fundamental role in caring for bowel cancer patients:

“Most patients facing surgery with these rectal problems are often terrified they may end up with a stoma. For many years we, together with other units around the world, have been exploring methods and techniques which try to restore gastrointestinal continuity without the need for a permanent stoma but at the same time eradicate the disease.”

QM’s School of English Drama weighed in on the events, responding to tweets:

In regards to the recent attention she’s received, Lynes has said

“The Twitter response was quite intense and slightly overwhelming. Some of the comments were amusing but it was interesting to see that there was very little awareness of the issues covered in our research.”