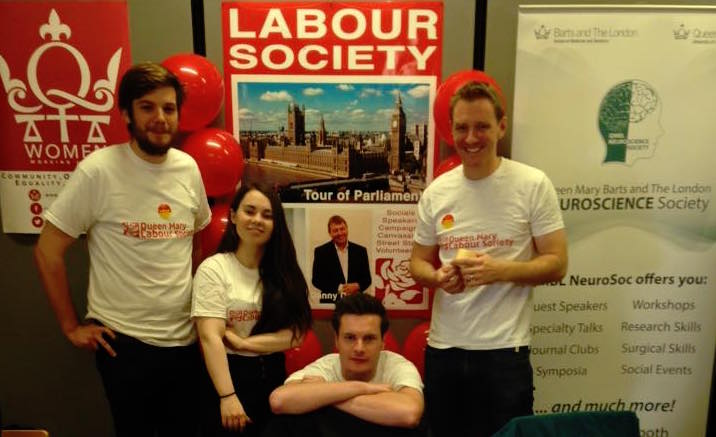 Reaching an almost threefold increase, the society says that their latest figures show that they have surpassed 100 paying members this academic year, in comparison to 37 during the 2014/15 academic year.

Queen Mary Labour Society (QMLS), who claim they are “the most active Labour society in London”, attracted interest from hundreds of first-years during Freshers’ Week. President of Queen Mary Labour Society, Oliver Davis, suggests that the membership surge on campus could have been partly down to the triumph of Jeremy Corbyn in the recent Labour Leadership Debate:

“It’s for different reasons – some for his left-wing politics, some because he is a person of integrity, and others because he seems to speak from the heart with authenticity. His position leaning towards free university education, although not yet officially adopted, may also have been a factor,” says Oliver.

Speaking about for his support for young people and his opposition to the Conservative’s plan to abolish maintenance grants for poorer students, Corbyn told the Huffington Post this year, “This Tory government is a party that stands against the young. Labour must build a society for everyone, including the youngest,” he said.

Asking if there were any other factors contributing to Labour Society’s success this year, Oliver added: “Many people were very upset that we got a majority Tory government, and see Labour as the best way to combat the Tories. We also had a much better stand at Freshers Fair this year and a much stronger presence.”

Adding that a rise in participation has followed a rise in their membership, Oliver says: “Our socials and meetings have been packed, we have just elected 8 new officers to our committee, and we are seeing a big increase in people canvassing and phone banking too.”

However, the rise in memberships across all other political societies at Queen Mary may suggest a growing student interest in politics rather than a student-body leaning towards the Labour Party. Queen Mary Liberal Democrats have also reported “a solid block of members previously not there”, whilst Queen Mary Young Greens reported a twofold surge in memberships.