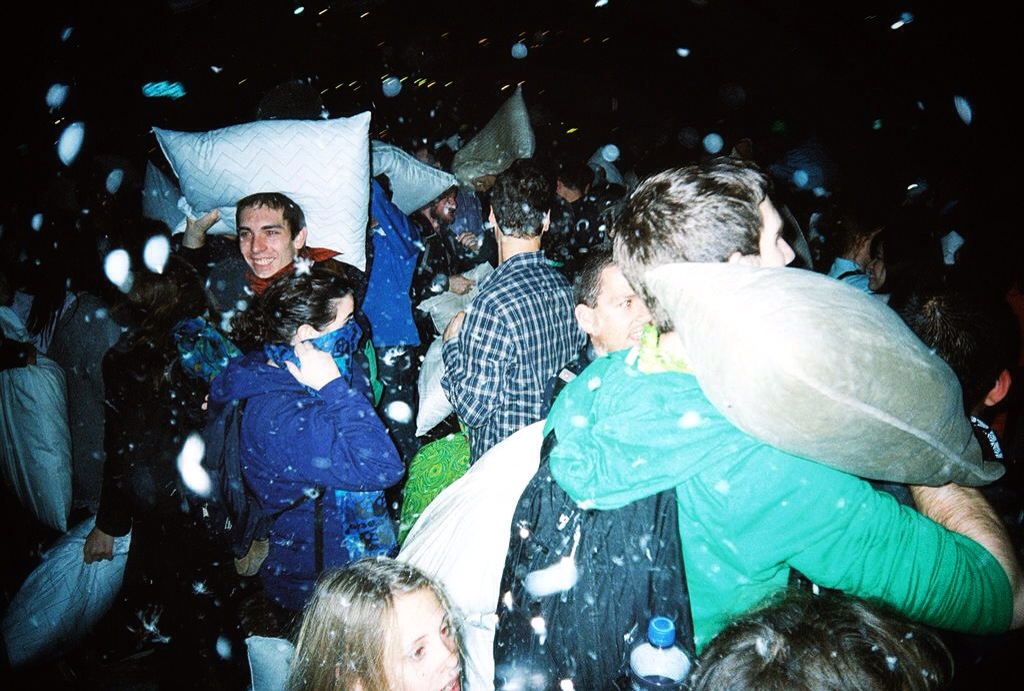 Is A Pillow Fight An Insensitive Guilty Pleasure?

Let’s be real: pillow fights were never as satisfying as you wanted them to be.  You and your friends may have jumped on your bed, fighting to release those pubescent frustrations, but it was never enough.  A pillow fight would never live up to the ones you saw in cartoons, where everyone leapt high in the air and feathers filled the room.  But then you grow up, and you realise you can adult your way to the best pillow fight of your life!  Yes, there are few things big people like more than to organise mass gatherings where they hit each other in the face with pillows.

And as it happens, one is coming to Queen Mary!  In the January Re-Freshers week, a pillow fight will arrive at campus on Sunday 10th January at 5pm (so you have the whole of Sunday to recover from your weekend long Re-Freshers bender!).  A Facebook event has appeared online with nearly 450 attendees. Being so late in the afternoon, the event will be in the dark.  So you can slide on your slankets and don your fluffy slippers, and when you get home you’re conveniently ready for bed.

It is not just a Queen Mary event however.  Pillow fights are cropping up all across University of London campuses.  There are promises of entertainment and rumours the event is ticketed, so what’s the deal?  If ticketed, it will hopefully be a charity event. Surely we are adult enough to organise our own free pillow fight with fun and philanthropy in mind.  Yes?  Is having a pillow fight compatible with being an adult?

Bear with me. As much as I love community projects where loads of randoms come together to bludgeon each other with sacks of feathers, I am still wary about why people even like pillow fights.  They are becoming increasingly popular, with yearly events taking place in large cities across the world.  A huge pillow fight took place in Trafalgar Square in April this year.  But in my eyes, it is just a lot of waste.  Perfectly good pillows are bashed and thrown, while stuffing and feathers leave on the ground a beautiful layer of soft white polyester (unless someone loaded arrives with a pillow stuffed with real down… poor birds!)

I think pillow fights are an indictment of privilege in our world.  While we have our fifteen minutes of pleasure, a rush of nostalgic excitement, there are multitudes of people on this planet, in England, even in Mile End, who need a warm place to sleep more than we need a pillow fight.  For this particular event, “all pillows that survive are going to be gifted to homeless shelters after the show.”  Am I the only person who finds this beyond insensitive?  We have the disposable income to relive our childhood fantasies but only willing to give the battered leftovers to the destitute.

So when considering what activities you will be attending next semester, ask yourself: is your New Year’s resolution to push the poor out of the proverbial bed for a bit of fun?