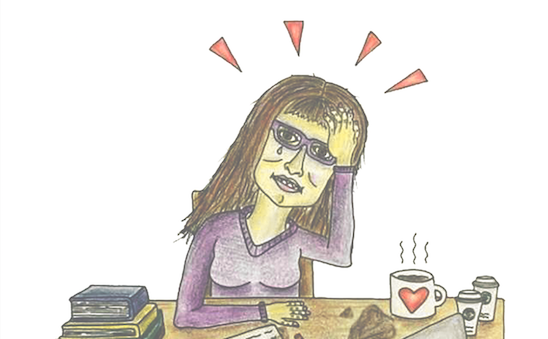 My name is Alice, and I know absolutely nothing about science

Diddly squat. Zilch. That’s what the tiny little Alice inside my head tells me ALL THE TIME. About 6 months ago I realised this is because I’ve been experiencing a condition known as ‘imposter syndrome’ for the past three years.

Imposter syndrome, also known as fraud syndrome, is a psychological condition that leaves an individual unable to internalise and accept their accomplishments, believing them instead to be strokes of luck. This condition causes feelings of self-doubt to drown any competing logical affirmations, frequently causing anxiety and depression. Sufferers may end up downplaying their competencies and ultimately limiting their own success due to the intense fear of being uncovered as a fraud.

In this meritocratic society, we frequently compare ourselves to others and often aren’t content until we’re in 1st place. A little competition never hurt, but years of being told we are the best at everything by our parents leaves us feeling as though ‘the best’ is our only option. Suddenly ‘failure’ becomes inevitable.

With no sliding scale of success and a penchant for constant comparison, people can feel inadequate in many situations. My colleagues in the lab – the post-docs, clinicians and other PhD students – are brain-boxes, boffins and geniuses (in no particular order) and all came from the top of their undergraduate class. Coming from such a high into an academic environment where you don’t rank above everybody else can give your ego severe whiplash, creating the vulnerability that imposter syndrome needs in order to creep in.

Imposter syndrome is rampant within academic circles; my own feelings of fraudulency are increased by my paranoias over the fact I still haven’t published a first-author paper and that I’m pretty sure my supervisor is an actual genius. The term ‘intellectual fraudster’ sums up the feeling for most. Despite having put endless hours into BSc’s, MSc’s, PhDs (you get the point), many academics are still left feeling like they don’t qualify to be in their position. Deep down, we know we’ve put in the hard work, but overriding the nagging imposter thoughts can be impossible.

Trouble arises when we compare our inner feelings to how others appear on the outside. Nobody walks around flaunting their inner paranoia in people’s faces, for example, so it is difficult to know how those around you really feel. One of the major reasons this happens in academia, particularly to PhD students, is because the idea that you will become THE expert in your area is drilled into your head.

I can tell you now that I’m definitely not an expert. Even those on the way to curing cancer and eradicating heart disease don’t know everything. It strikes me as a shame that many of those in a career that offers a constant stream of new and exciting knowledge expect themselves to already be in possession of it.

Only by admitting that we don’t know everything – and that we’re not expected to – can we start to say goodbye to the imposter restraints. It will take those that experience it to speak up and tell people, whether in person, online or in (The) Print, that you wouldn’t be feeling it if you didn’t deserve to be where you are, because the real imposters are likely too incompetent to even recognise their own mistakes.