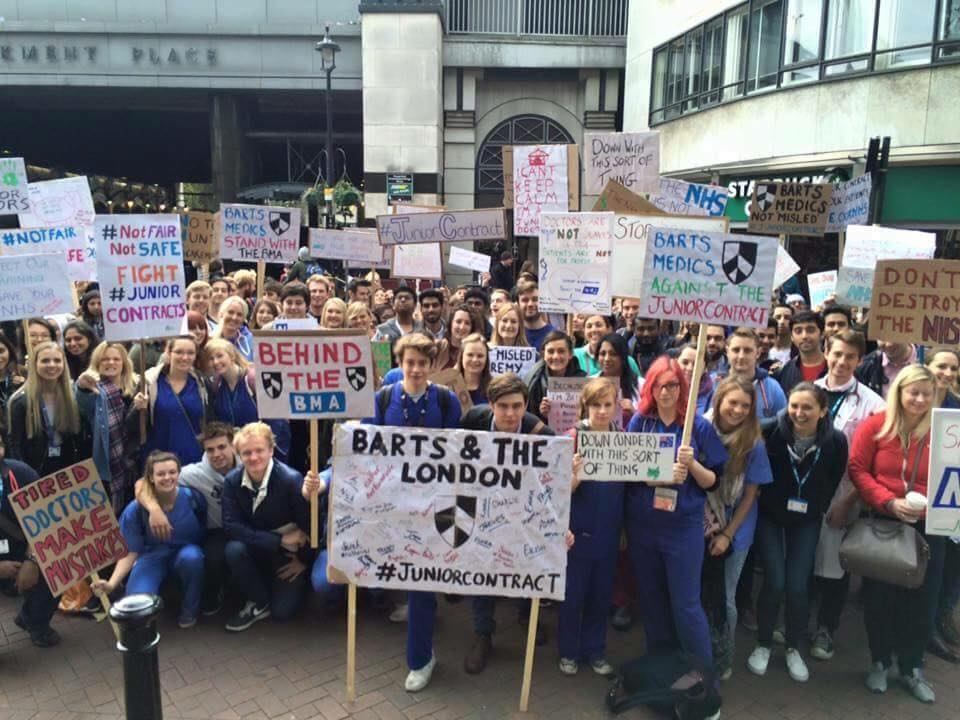 “I should be studying not protesting”

On the 28th of September, a group of over six thousand junior doctors and dentists, including hundreds from Barts and The London School of Medicine and Dentistry, marched on Westminster and Downing Street to protest against proposed changes to their contracts. One protested held a sign that read “I should be studying not protesting”.

NHS Employers has announced it will be imposing a new contract, reclassifying ‘sociable hours’ to 7am – 10pm from Monday to Saturday instead of the present 7am – 7pm Monday to Friday, resulting in an enormous cut of up to over 30% in overtime pay for doctors who often have to work late shifts and weekends.

Additionally, extra funding for GP trainees, necessary to fund a shortage, would be cut and those taking time out for study or to start a family will be financially worse off.

The government has suggested that the existing contracts from the 1990s are outmoded and, and plan to raise the basic pay level for junior doctors and to introduce a contract which is more suited to the modern era of healthcare.

Many remain outraged at the announced changes, stating that they are an unfair recompense for the length of training and responsibilities of the job. Some have suggested that patients will be put at risk if they are being treated by exhausted or demotivated doctors.

The British Medical Association opposes this move and has re-entered negotiations with NHS Employers to try to secure a better deal for their members. The BMA have also announced a plan to ballot for strike action, which last occurred in the 1970s.

Will Atkins, President of the Barts and the London Student Association, has said that:

“These changes will lead to poorer morale, higher burnout, and unnecessary levels of fatigue for the people delivering patient care. The only possible outcome of this is poorer care for patients, which is something that no NHS professional wants. This dispute fundamentally isn’t about pay, it is about ensuring the safety of patients.”

As plans for a second protest are already underway, Sarah Louise Ward, a final year medical student at Barts believes that:

“For NHS staff, this was the straw that broke the camel’s back; the Government’s staunch refusal to actually negotiate – properly, in dialogue with the BMA – riled us all”.

Formal support was expressed by the Queen Mary Students Union during a council meeting on the 13th October, where a motion was passed that committed the Union to campaign on the issue of junior doctor and dentist contract negotiations. They have since issued a statement maintaining that:

“As a Union we believe that medical and dental students deserve to have a secure future in the NHS in fair working conditions, and are concerned that the proposed changes will lead to doctors and dentists being over-worked and under-paid which can only lead to poor patient safety.”

“We urge the Secretary of State for Health and NHS Employers to reconsider the imposition of these contracts, and make the concrete assurances the BMA has requested in negotiations in order to ensure patient safety. We believe we must all support the hardworking junior doctors and dentists of the NHS in their pursuit of a fair deal for patients and a fair deal for the NHS.”