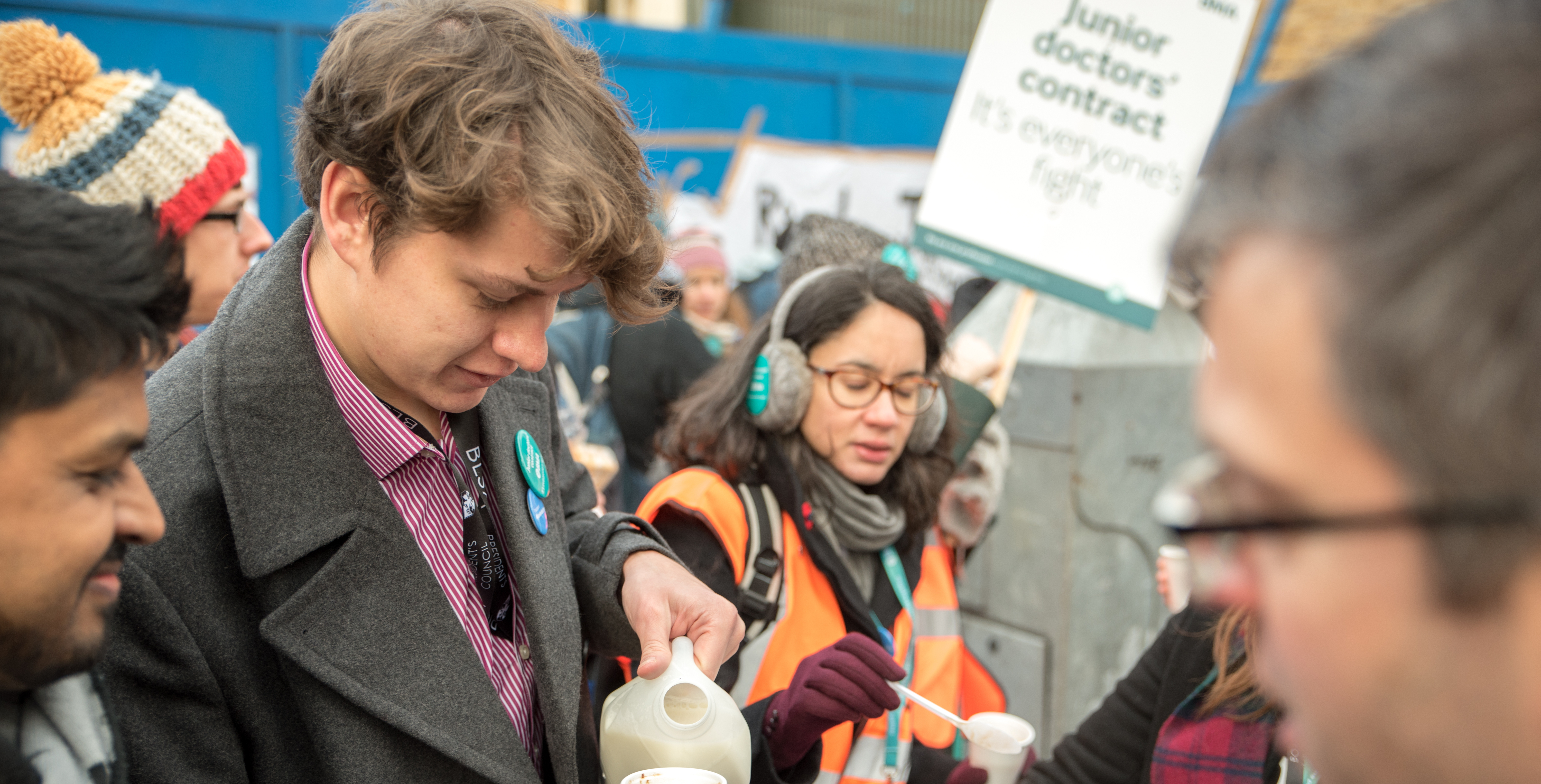 Barts Students Join Junior Doctors’ Strike: “These may soon be our contracts too.”

Hundreds of Barts students join as many as 35,000 junior doctors who took part in strike action on Tuesday, along with support from medical staff, medical students, and members of the public 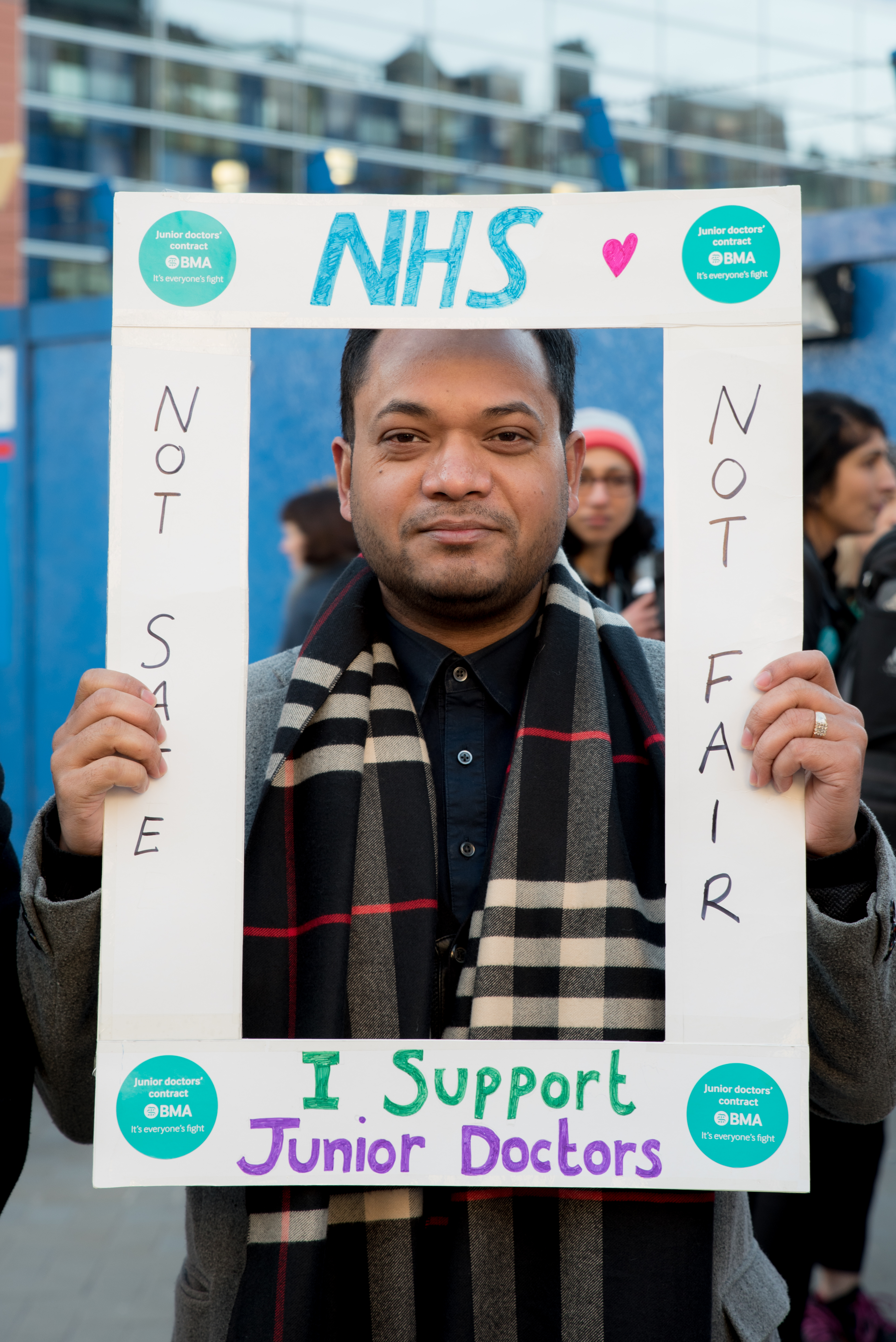 Calls for industrial action came after a new contract revealed by NHS Employers planned to remove some of the safeguards that are in place to protect against excess rostered hours and reclassify ‘anti-social hours’, leading to a reduction in the amount junior doctors can earn from overtime of over 30 per cent.

Polling by IPSOS Mori indicated that the strikes were well supported by the public, with 66 per cent of people said they supported junior doctors walking out from all but emergency care.

Prime Minister David Cameron spoke against the strikes, suggesting that they were “not necessary” and “damaging”. He continued to state that the Government would do all it can to “mitigate its effects, but you cannot have a strike on this scale in our NHS without real difficulties for patients and potentially worse.” 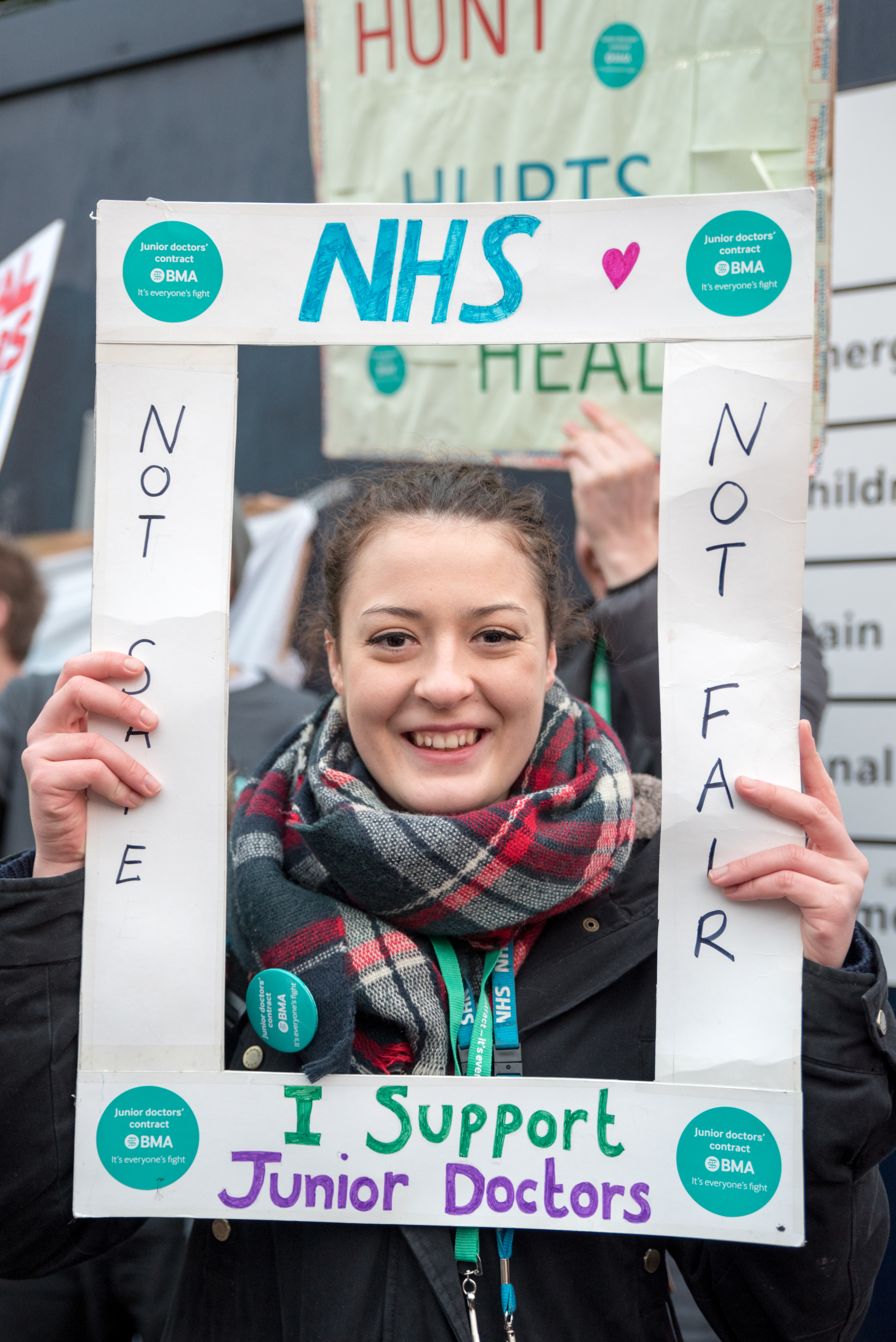 Leader of the Labour party, Jeremy Corbyn,
indicated he felt the Government had not handled negotiations as well as they should have. Speaking on BBC Radio 4’s Today programme, he said:

“These junior doctors are needed for the NHS. How many are going to go somewhere else because they get so fed up with how they’ve been treated by this Government?”

QMSU issued a statement of support in November, stating that they “support the hardworking junior doctors and dentists of the NHS in their pursuit of a fair deal for patients and a fair deal for the NHS”, urging “the Secretary for Health and NHS Employers to reconsider the importance of these contracts, and make the concrete assurances the BMA has requested in negotiations in order to ensure patient safety.”

Barts student Michael Shaw protested at The Royal London
Hospital’s picket line and spoke to The Print about what he experienced and why he felt it was
important: 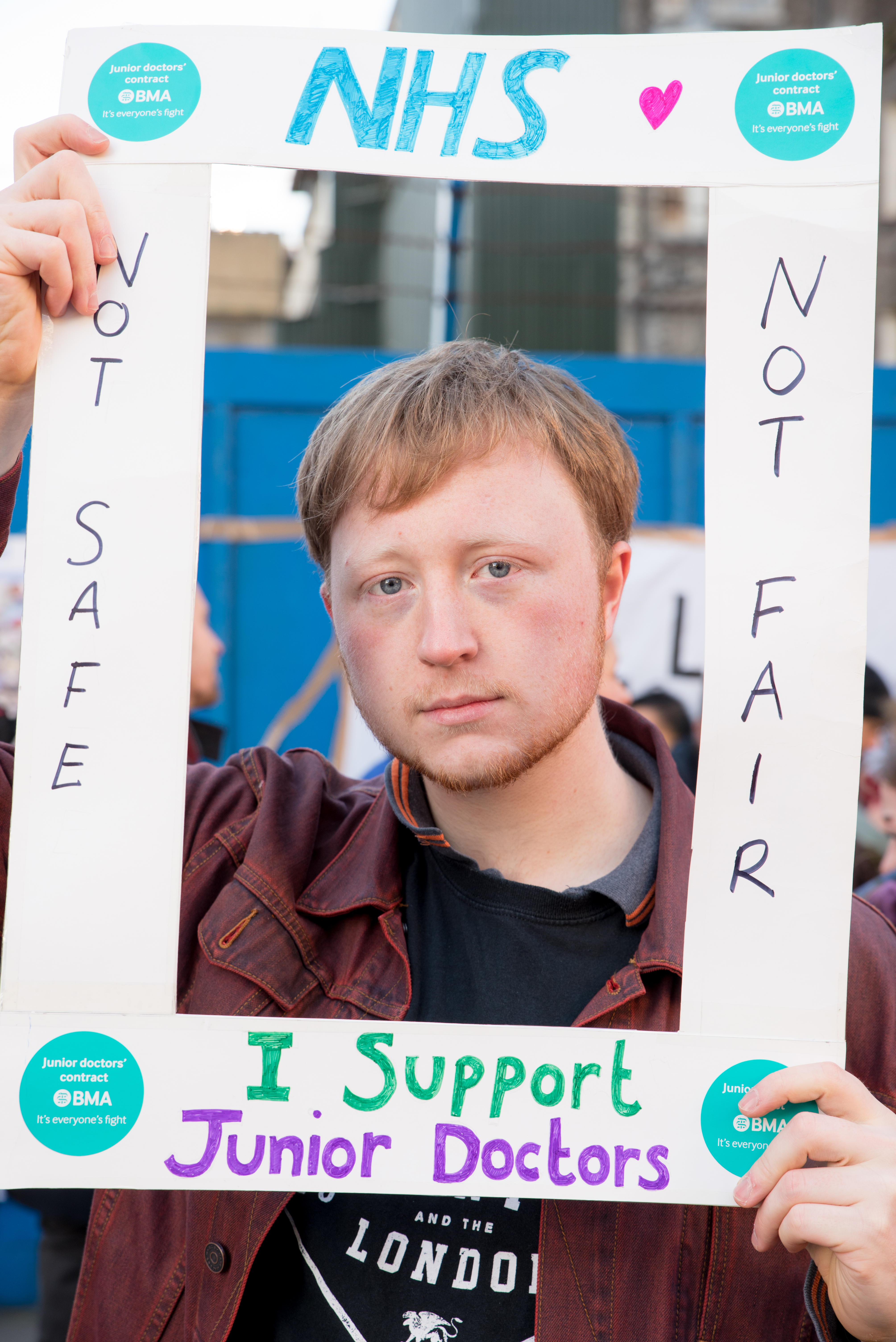 “It’s disappointing that the government has forced us into a position where we must take industrial action to safeguard doctors’ working conditions and protect the future of the nation’s health service, but I was proud of the dedication I saw on picket lines.

“Not just from the junior doctors themselves, but also from medical students, nurses, allied healthcare professionals and members to the public, who recognise how dangerous the changes Jeremy Hunt wants to impose are for the future of the NHS”.

Jeremy Hunt, Secretary of State for Health, has argued that the strikes will harm the care provided by the NHS. Speaking to the Telegraph, he said: “The withdrawal of elective care for the first two strike periods will be something that causes enormous frustration to patients who have their operations cancelled”.

Hunt also argued that “it’s a concern if some elements within the BMA are seeing this as a political opportunity to bash a Tory government that they hate”, although he did go on to suggest that he believes “the vast majority of doctors are not in that place”. 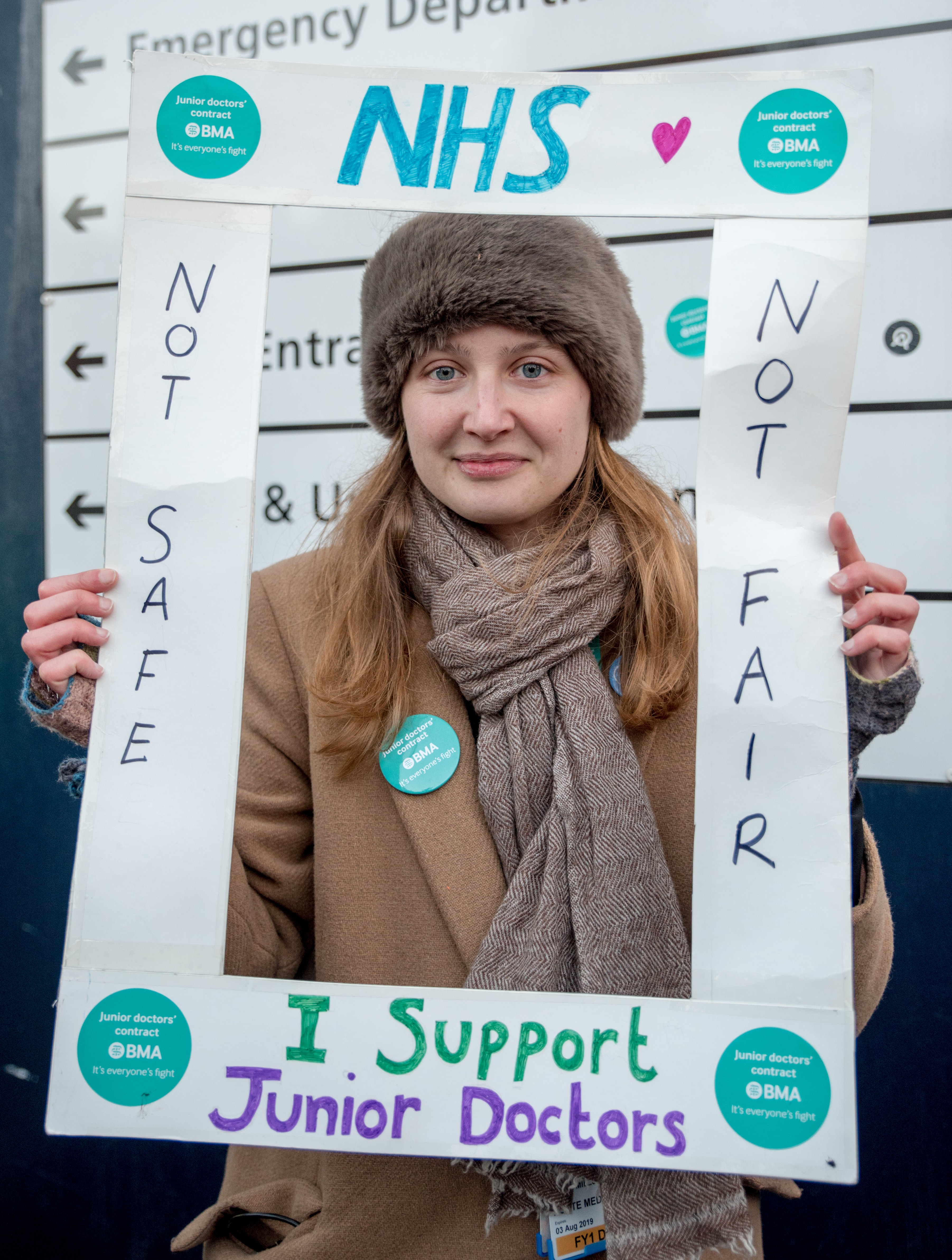 A spokesperson for the BMA responded by saying that they are an “apolitical organisation”, and that “no doctor takes industrial action lightly and we regret the disruption it will cause. However, junior doctors now feel that they have no option”.

Under the proposals, doctors working 11 hour shifts would get just one 30-minute break. Second year medical student, Jonny Comont, told The Print that “in this instance, junior doctors not exercising their right to strike would pose a greater threat to their ability to provide safe patient care in the long term”.

Will Atkins, President of the Barts and the London Student Association, stated that:

“This strike is so important because it demonstrates the depth of opposition to these contracts amongst junior doctors. It’s clear that what the Government is proposing would be unfair for doctors and unsafe for patients.

“Barts and The London students came out in their hundreds to support our junior doctor colleagues on strike day because these may soon be our contracts too, and we feel so strongly that the changes are bad for patients and bad for the NHS.

“We implore the Government to support the NHS by listening to junior doctors and addressing the legitimate concerns that the British Medical Association has expressed in negotiations. I was so incredibly proud of all of the students who came out in support of our colleagues, and hope their resolve will persist for the strike days still to come.”

Published in Barts & The London News, Curated and News