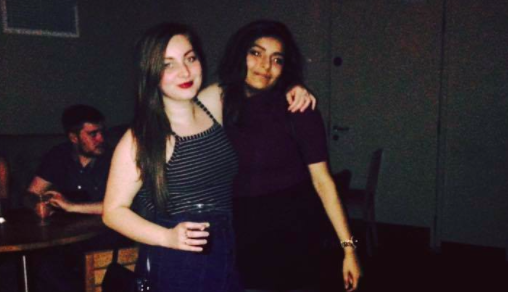 By Maansi Kalyan on 2nd December 2015

I’m Maansi. I am a British Indian, I was born and raised to respect my rich heritage, and I am proud

At least, that’s what I tell myself. This sentence repeats itself over and over again in my mind, on a loop, confirming with it my identity. It’s who I am, how I was raised to be as a person, and an individual in my own right taking pride in my culture.

It’s brought me solace in the past, knowing that I was different to some people but that I was a good different – that I could celebrate Christmas and Diwali with the same exuberance; that I could switch between watching EastEnders and wringing my hair at a ridiculous low-budget Hindi soap (slow motion shots and families fighting over who gets the last cup of tea? Yes…); or pull off a Topshop gilet as well as I could a glitzy saree, or bitch about people with my sister by switching from English to Guajarati in seconds (critiquing outfits at Indian weddings like we’re the Fashion Police is still a necessary past-time). I reveled in the fact that I belonged to two different worlds, that I was the product of so many opposing values and customs – recently, however, it’s all been brought into question.

It only takes one comment to completely shatter everything you’re so sure of, to transform a certainty that is held up with your concrete conviction into a doubt.

I was walking past Stepney Green station to get to a friend’s flat a few months ago when I was encountered by a couple of men. I refused their advances by ignoring them completely, but as I walked past them they thought it best to let slip a filthily racist remark.

I am never affected by the words of the rejected man – I know that there is no substance to his abusive words, that they are empty and only said to soothe a bruised ego – but I cannot believe how affected I was in this one instance. I had never been more aware of myself, of the colour that defined me, and this awareness was one tinged with shame and loathing. I wanted to disappear in that moment, to be someone else that was void of my ebony hair and tanned skin. It’s enough that girls are oppressed for being girls, but being made to feel inferior for the other half of myself really was the tipping point that brought everything into question: was I proud to have a rich heritage, or was it just something that was weighing me down? Did I really want to be this hybrid? Did I really want to be me?

It’s horrid that women are thought of as ‘the other,’ but it’s worse that women with coloured skin are subject to being insulted twice over. We find ourselves at the very bottom of the spectrum, and it was this incident that really brought my status to light. I still ask myself how someone would have received me if I didn’t look Indian, if my very name didn’t connote my origins – my pride in heritage still slips from time to time so that it feels like an act, a notion that I have to keep convincing myself of out of guilt.

I have many friends who always tell me how lucky I am to be Indian, who say that they’d kill for a background as beautiful as mine, but they are oblivious to the struggle that comes with such an identity; for racism not only attacks your physical appearance but manages to damage your confidence in the process. I found that I didn’t feel like I belonged in this country anymore – I was born and raised here, I am currently writing this column in the language that I spoke my first words with, and yet I felt like a complete outsider.

Diversity is something that should be celebrated. It is in the most part. What must be called into question are the rare few who make a deviation from the norm so uncomfortable to have that the only response becomes a suppression of this deviation, an abandonment of it. Identity is as fragile as it is significant – it can break you just as easily as it defines you – and it’s concepts such as racism that must be completely eradicated in order to allow people to make peace with themselves.