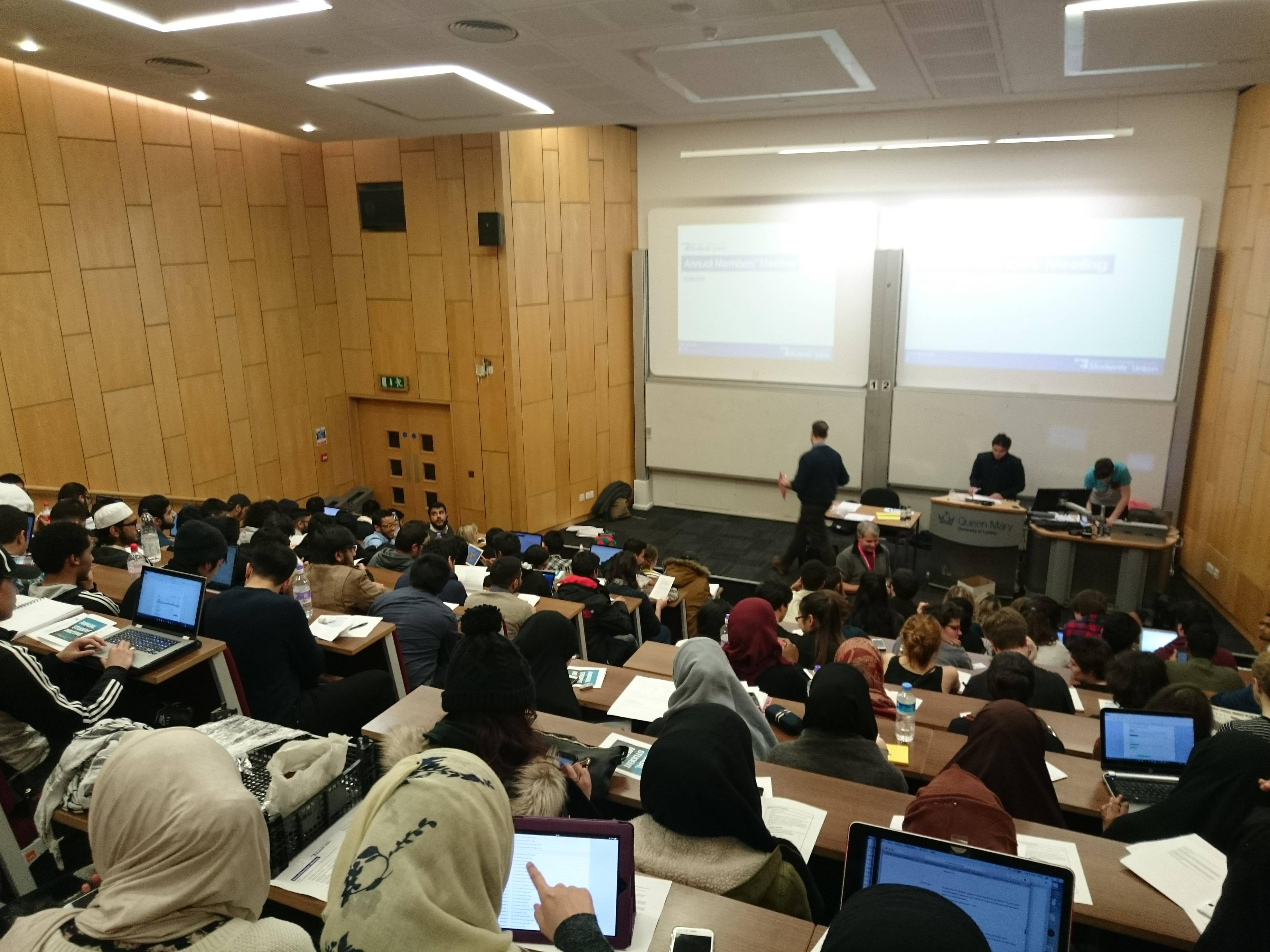 On the 15th of November, Queen Mary’s Islamic Society (ISoc) were suspended from carrying out all Union related activities for 16 weeks. They will remain suspended until an Emergency Board meeting, now to be held before the end of term, can meet to decide the society’s status.

In a statement posted on The Islamic Society’s Facebook page, they stated that “the suspension comes as a result of allegations, many of which [they] are still unclear about”, before suggesting that they are “working with the SU to gain better clarity on these issues in hopes of putting this matter to rest”.

The society has previously been accused of hosting “extreme” speakers, including Haitham Al-Haddad, who spoke at QM in March 2014 and was prevented from speaking at the University of Westminster after referring to homosexuality as a “criminal act”.

Amidst the society’s suspension, Isoc members passed two motions at QMSU’s Annual Student Meeting stating that societies should “be able to discuss the allegations they are accused of before a conclusive outcome is made to uphold a fair, transparent and impartial investigation.”

The first motion, proposed by the Principle Officer of ISoc, Akiqul Hoque, asked: “Should there be greater transparency provided by the Students’ Union with respect to a suspension given to a society?”

In arguing his motion, Hoque was not allowed to reveal what the society had been suspended for, due to the ongoing investigation, but argued that “some of the allegations [ISoc] are being accused of are beyond the remit”.

He went on to imply that QMSU did follow protocol, but that “there are far more serious matters at hand” as some Isoc members believe that the society has been treated “unjustly.”

The second motion asked whether the “Emergency Societies Board meeting” that will decide the status of the Islamic Society should be brought forward, as it was originally scheduled to take place in the new year.

The motion argued that: “The Societies Board, which decided the outcome of the suspension, will currently be meeting in January. This date cuts a lot into the suspension already, which means a lot of events and socials for members cannot take place at all until this meeting occurs and a decision is made.”

It went on to suggest that “the current forecast of the Societies Board meeting taking place will impact a lot on what the Islamic Society provides, such as the events and activities which are catered towards the needs of Muslim students on campus (prayers, socials and events), building understanding with other societies and benefitting [sic] through local and international projects such as Charity week.”

Whilst this motion was being debated, a member of audience took to the stage to say “If you’re going to vote for the motion today, I don’t want you to do it because you got a text message telling you to do so”.

A representative for QMUL has said that “Queen Mary Students’ Union has suspended the Islamic Society (ISoc) while it investigates claims that Isoc breached agreed protocols and procedures. Further information will be available following the conclusion of the investigation.”

Queen Mary University of London Students’ Union have confirmed that they have suspended The Islamic Society, and told The Print that: “The Students’ Union is currently looking into claims that ISoc has broken some of the rules associated with running a Students’ Union society. These rules apply to all societies and student groups and cover things like room bookings, event advertising and use of facilities. The Students’ Union is keen to resolve this investigation quickly to ensure that ISoc are able to resume their activities for their members.”