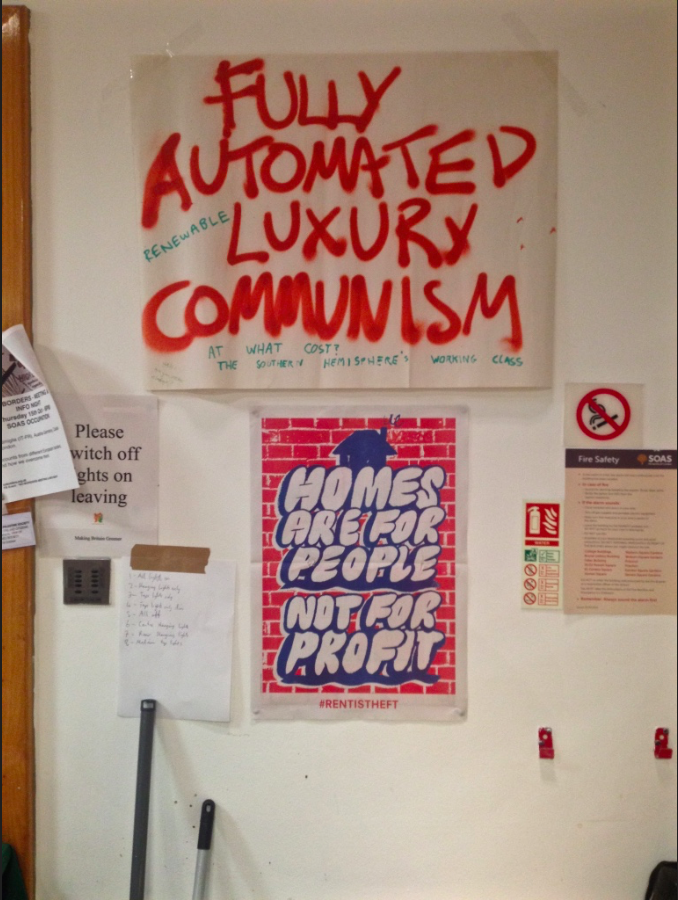 By Daniela Clark on 8th November 2015

The QM Marxist society is entering its third year as a society, and in light of recent developments in British politics is pushing for wider student engagement with the ideas of Marxism. We asked them a few questions about their ideas and what their society is up to

The Print caught up with QM’s Marxist society to find out what they’ve been up to, and learn more about the events they’ve been hosting in order to encourage students to apply a Marxist critique to current affairs

What would you say to people who think that Marxism is a somewhat outdated idea?
I think it’s a common simplification that Marxism merely entails the conception of a Communist society, it’s much more than that. It is also a philosophy—a way of reading the world around us—which allows us to find the path to attain a better society. It’s the understanding that everything taking place in our world today, from the cuts in the public sector to the rise of ISIS, is a product of the material conditions of reality; in other words, the way the means of production are distributed among society. It is an economic assessment of history, really. I don’t see how that can ever become outdated.
Just look around at the world today. Our world is so full of misery and inequality that an idea which aims to revolutionize the way our society is structured, tearing at the very foundations of those problems, and to create a better world for *all* of us cannot be disqualified as irrelevant. That would only make sense if someone was satisfied with the way things are, and I doubt many of us think that.

What happened in at your most recent meeting?

We covered the background to the Greek financial crisis as well as the results of the Greek referendum and the recent elections. One of the most interesting points of discussion was whether it would have been better for the Greeks to leave the Euro; we had four Greeks present in the meeting and, based on their experience of the crisis, the recent movements which have elected Syriza, and the imposition of an even worse austerity program, they seemed to be in agreement that it would have been better for Greece to leave the Eurozone, even if that would imply difficulties in the short term. They felt that none of the problems the Greeks are suffering now due to austerity can be resolved on the basis of Capitalism, particularly because any alleviation of Greece’s debt would automatically encourage other countries such as Spain and Ireland to ask for similar solutions.

Why do you think it’s important to cover current events in relation to Marxism?

I think it’s not only important, but necessary to cover current events through a Marxist perspective because it is the best way through which we can come to understand the real causes of events around the globe—and us Marxists believe that is Capitalism. If we don’t understand why things happen, we have no real basis for intervening in them in order to alter the conditions which allow for these things to happen.

For more information visit their Facebook group https://www.facebook.com/groups/qmulmarxists/?fref=ts or email them at qmulmarxists@gmail.com