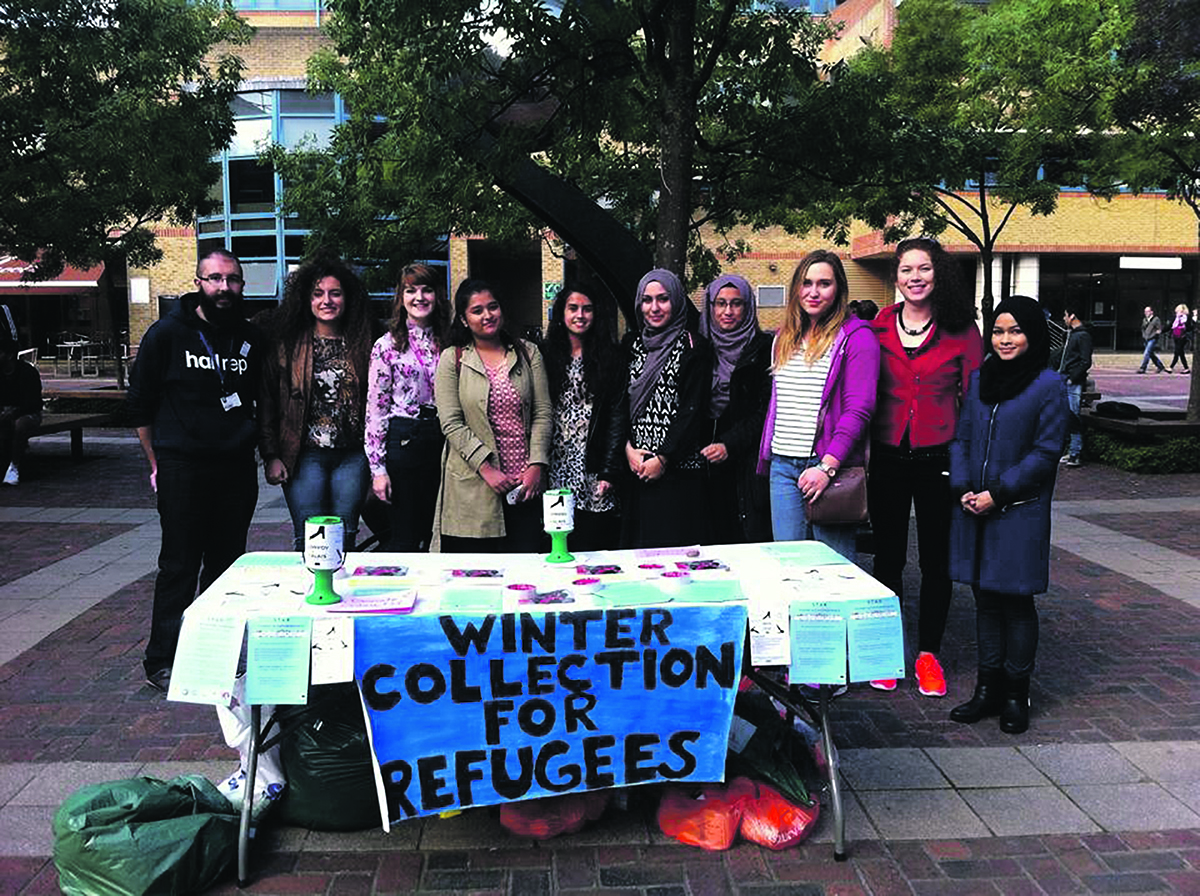 By Sarah Garnham on 7th November 2015

On the 1st of October, the Convoy to Calais group took to Library Square to collect essential supplies and raise money for the refugees in Calais

Convoy to Calais was set up by third year Psychology student Mayisha Begum on her birthday last year. It was initially intended to just be a small group fundraiser and distribution at the camps.  However, after seeing the way the government and the media were treating the refugees, they knew that it couldn’t just be about collecting supplies. The group shifted its focus to include educating people about the reality of the situation, reminding people of their humanity, and encouraging love and compassion rather than hatred and intolerance.

We asked Mayisha how the event on the 1st October went and she told us: “Amazingly well! We received a range of donations from tinned foods to wellingtons, and the best part was that you could tell everyone who donated had looked at what was needed and really thought about the refugees and their needs, which is beautiful.” They also managed to raise £54.13, despite not even planning to do a fundraising collection, because people kept giving them money too. They were also helped out on the day by Student Action For Refugees (STAR), a student-led national charity who work directly with refugees in the community and also, like the Convoy to Calais group, aim to educate people about refugees and asylum seekers.

Miranda Black, VP Welfare, was also helping out on the day. She told us: “next Monday I’m helping her to set up a stall where students can package up food parcels and write a message. I’m also keen to run a collection at Whitechapel next week before the convoy!” She also spoke very highly of Mayisha: “A lot of students got in touch wanting to do something in light of the recent publicity surrounding the refugee crisis. Mayisha is an inspiration. She set up Convoy to Calais for her birthday last year, asking her family and friends to give money to the cause instead of giving gifts to her. She has been running collections and events across London, and has organised the convoy.”

The group plan to take their supplies with vans to Calais on the 31st October, and due to the overwhelming support and supplies they’ve collected, they’re are also planning a second trip on the 7th November. At Calais they will give their supplies to the warehouse currently storing donated provisions; they also hope to help and if possible talk to the refugees there.

And it’s not just on Queen Mary campus – they’ve also been collecting in towns all over London: Walthamstow, Poplar, Balham, Mile End, Hackney and Kings, University of London also held a collection for them.

They are running a huge number of events in the up-and-coming weeks, so to find out more visit their Facebook page, Twitter account (@ConvoytoCalais) or email them: convoytocalais@hotmail.com