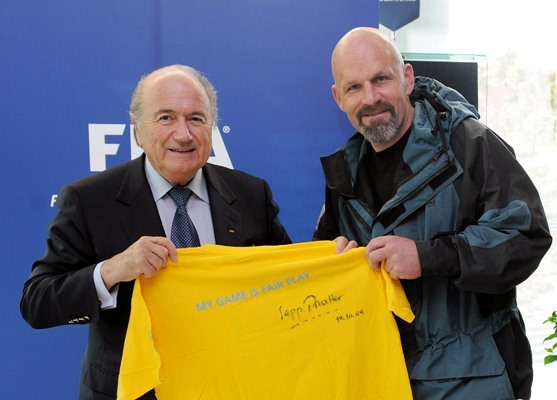 By Liam Harrison on 2nd September 2015

After decades of corruption and contempt, what should FIFA do with its chance to change?

Sepp Blatter: FIFA president for nearly 2 decades and master of outsmarting opponents, dodging investigations and swerving criticism. After getting himself re-elected this past May for the fifth time, he *resigned. Until now, despite being the almost dictionary definition of corruption, FIFA had been able to escape any prosecution.

As dawn broke in Zurich at the plush Baur au Lac hotel on 27th May, 7 FIFA officials were arrested by the FBI. FIFA were stunned. How dare someone enforce the law upon them for engaging in illegal acts? With a FIFA election just a few days away, the FBI had certainly picked their moment.

The arrests were in relation to a joint    Swiss and US attorney general’s office probe into fraud, money laundering and racketeering. Since then, the investigation has widened and authorities are now investigating the awarding of several World Cups including Germany 2006, South Africa 2010, Russia 2018 and Qatar 2022.

So why did FIFA president Sepp Blatter stand down despite winning the election and beginning his fifth term? Was he wondering whether then investigation would hit him if he didn’t?

For the first time since 1998, football’s world governing body will now have a president other than Sepp Blatter. Although it’s true that Blatter expanded FIFA in sporting, financial and territorial terms, he was also in charge during the time of an unprecedented amount of corruption scandals.

Of course, Blatter’s not the only figure of contempt in this tale; he was groomed for his role as president when he was FIFA General Secretary by his predecessor, the Brazilian Joao Havelange. There are of course many other names that spring up when discussing the most tangled web of corruption in FIFA: Chuck Blazer, Jack Warner and Nicolás Leoz just to name a few, but the point of this article is not to delve into that. The point of this article is to explore what options we have in terms of FIFA moving forward in a transparent and reformed manner.

FIFA needs to change by fundamentally modifying its organizational structure. Reform shouldn’t just get rid of troublemakers, but should introduce stipulations to stop corruption, correct how World Cups are awarded and put measures in place to improve the grass roots side of the game. The mechanisms enforcing such things will not be east to create, as FIFA have show its current members are not the most democratic or social concerned folk, but if bought about they would aid the faith people have in both the organization and in football itself.

Even if Blatter has left, the acquaintances he made still remain at FIFA and are very important players in its day to day governance. As David Goldblatt wrote in a recent Guardian piece:

“…let us be careful what we wish for. The king is heading for exile, many of his courtiers are in the tower or on the run, but the ancient regime remains intact.”

The election for a new President is open to any candidate putting themselves forward, and with no certain outcome we can’t be clear whether it will lead to FIFA getting the reforms it so desperately needs. It’s a deeply divided organization with many sponsors who have their own vested interests.

However, the chance for wholesale reform is here and FIFA need to look from the bottom up. Grass roots football is where it all began, and we need to make sure it’s a priority in the new, (hopefully) reformed organization. To quote Goldblatt one last time: “The king has fled; let us not arrange another coronation but begin the process of building a republic.”

*Didn’t actually resign. He’s in charge until they find someone else.

Liam Harrison
More from OtherMore posts in Other »