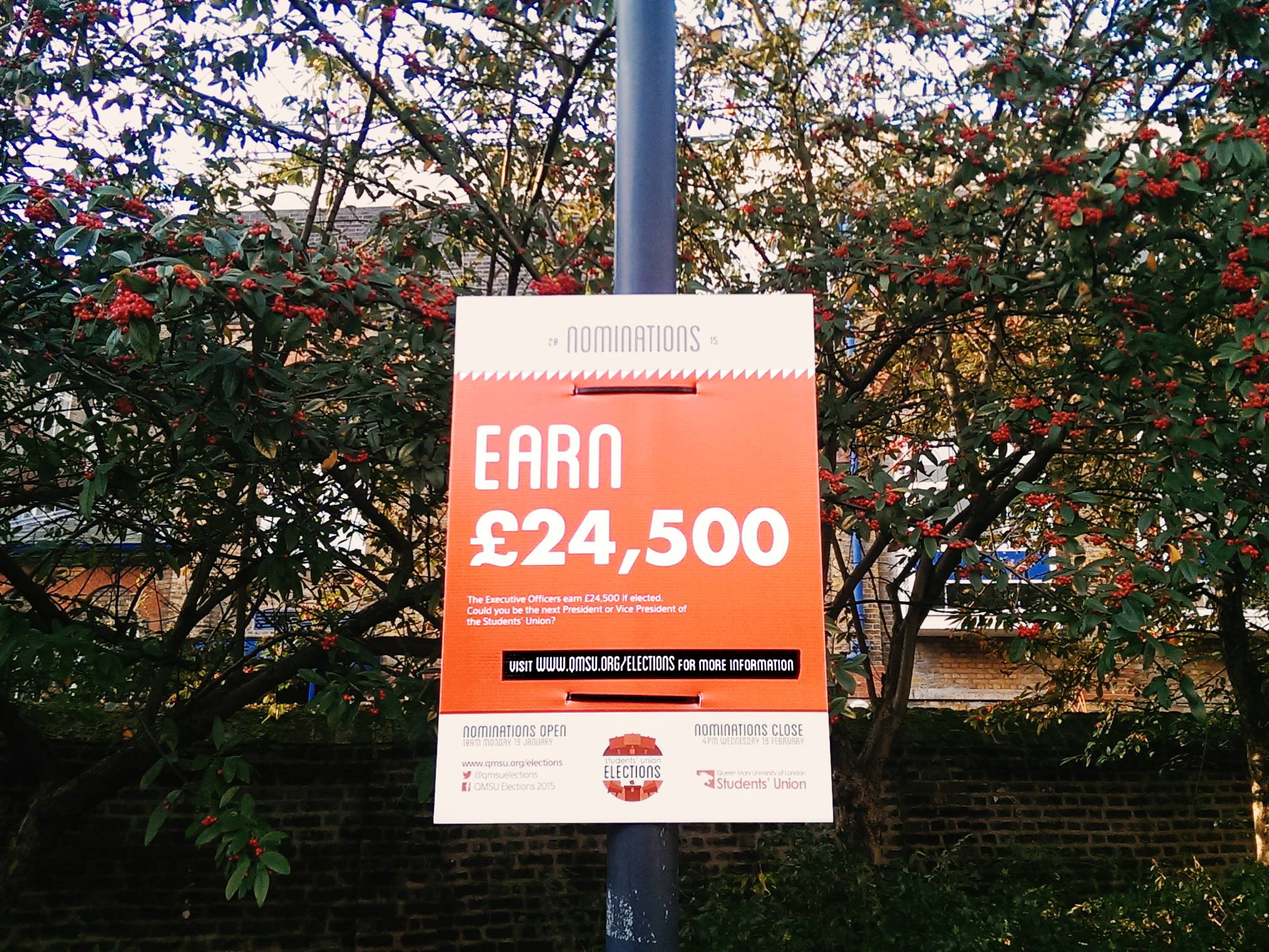 QM Elections: Show me the Money

Sabbatical Officer salaries are always a hot topic during election time, so we had a look around our beloved University of London to see how our Sabbs’ pay packets compare to the rest

“Happiness is not in the mere possession of money; it lies in the joy of achievement, in the thrill of creative effort.” – Franklin D. Roosevelt

Old Franky was right. If we concentrated on achievement and creative effort (or lack thereof), elections would be a much more blissful and care-free experience. Sadly, we don’t, and the question of money in student elections rears its ugly head year on year, especially when it’s the largest piece of information on most election advertising and students are keen to work away at the voluptuous student debt they’ve been gifted with.

Twenty four and a half grand (£24.5k, free gym and 20% food discount*) seems like a lot but how does it compare to other universities? The Print wondered how the salary of sabbatical officers across London compared with Queen Mary so we had a look around.

We’ve compiled a cheeky run-down of University of London sabbatical salaries as well as any perks of the job that are also stated.  Election campaigning has only just kicked off and people are already debating pay so this is definitely an eye-opener on the standard of pay across London universities.

Perks: 26 days of holiday, interest free season ticket loan, a work phone and branded clothes (though we would probably just want to buy our own clothes with £20,000). The salary might be the lowest, but Westminster definitely comes out on top for the added perks of the job.

Perks: We couldn’t find any but we assume it comes with a warm fuzzy feeling knowing you were a Sabb at the uni that helped hone the creative talents of Damon Albarn, James Blake and Damien Hurst among others.

Perks: Apparently none, but there are rumours of free unlimited soft drinks…

The London School of Economics and Political Science (LSE) – £26,582

Perks: At LSE, officers receive 25 days holiday, free gym membership and the opportunities to ‘develop skills and contribute to a long lasting impact on student life.’ Of course, they also had to slide in the whole ‘Looks great on your CV’ ‘benefit’, which frankly, is usually something we never hear of as students. The secret is out.

Birkbeck’s officers are expected to work 7 hours a week and are paid £8.80 p/h for their roles. Working the estimated 7 hours a week can see them earn approximately £3,000 a year. This seems arguably pretty fair for a part time role, but makes us question what should be a fair wage for our sabbs. If we calculate using the London living wage of £9.15 (the national minimum wage is £6.50) an hour for our full time officers, they can expect an annual wage to be just under £18,000, which differs significantly from what they earn now!

Whilst Imperial’s salary wasn’t entirely clear (it’s not technically in the University of London either so we didn’t bother digging) it is definitely worth mentioning because the paid positions also include a free room in halls or money to cover rent elsewhere. Who would say no to free accommodation?

So there you have it, Queen Mary is up there with the best. No matter what people say, salary is always going to be an incentive for applications – it is a full time job after all. Comparing the above figures to the average starting salary for Queen Mary graduates (which has been estimated to be lower, at £23,171) and the average national yearly salary of 26.5k only adds further fuel to the fire of debate. We’re not even going to mention HECSU’s ‘What do Graduates do?’ report which observes that the average salary for UK graduates in full-time employment six months after graduation ranges between £18,000-£24,000. (Oops)

Although salary is a big point of discussion, perhaps the debate should move beyond merely numbers and ask bigger questions. Are Sabbs doing enough for their money and are they a worthwhile investment for the Union? Should more pledges be met to justify the spending? Could salaries be lowered to fund other projects?

Either way, we’re sure the discussion will rage on over Twitter, and frankly, we look forward to reading it.

*All SU employees included all elected positions in the QMSU elections are entitled to free gym membership and 20% food discount.