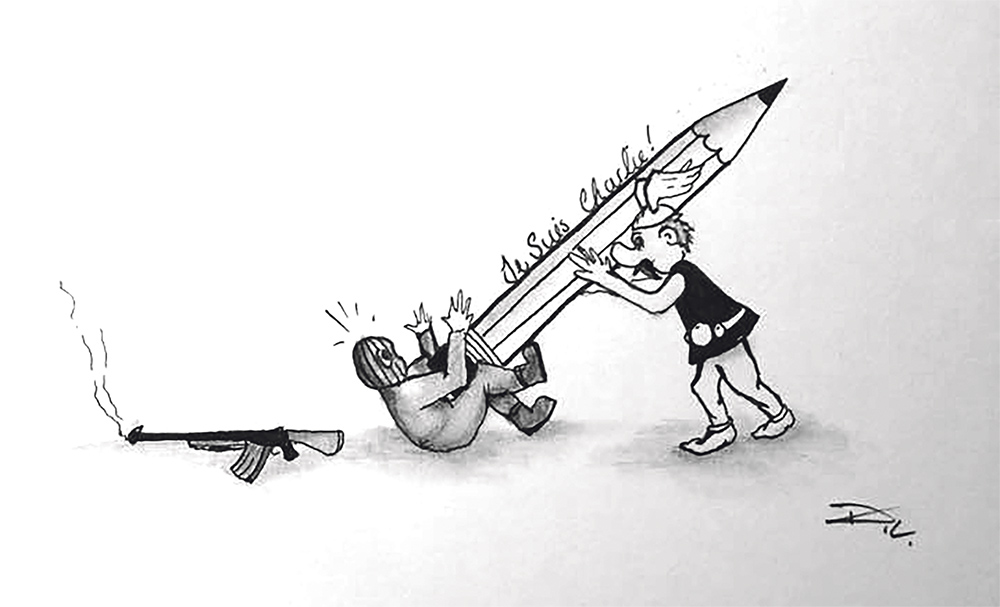 How far can freedom of the press be used as an excuse, or reason, for publishing offensive content?

On 7th January, twelve journalists, cartoonists and police officers were killed in an attack on the Charlie Hebdo offices. These shootings continued throughout Paris over the next two days, a further five people falling victim.

The political aftermath of these shootings has divided the press throughout the world, with public opinions ranging from cries demonising the shooters, to anti Charlie Hebdo marches happening all over the globe. One of the most publicised and apparently appropriate reactions to the horrific shootings has been the highly Western-centric focus on actors, directors and other miscellaneous celebrities showcasing their ‘Je Suis Charlie’ badges at award ceremonies.

This inadvertently lead to a highly public, although silent protest, that resulted in the shutting down of Iranian Newspaper, Mardom-e-Emrooz, for simply publishing a photograph of George Clooney wearing his ‘je suis’ badge. However, as the attention dies down and the public are left reeling in the aftermath of the tragedy, we are still left with one question that almost everyone seems to be failing to answer: how far can freedom of the press be used an excuse, or reason, for publishing offensive content?

The weekly satirical magazine, Charlie Hebdo, is part of a secular French tradition of satire that has left nothing not critiqued or criticised since the 18th century.

Its subject matter has moved from the Royalty-mocking days of the French Revolution, into a significantly more international and potentially offensive portrayal of heads of state, racial stereotypes, and religious figures. It is this racial and religious element that has been highlighted in lieu of the recent events; the shooting at the magazine’s offices being carried out by apparent self-proclaimed Islamists, who cite a cover depicting the Prophet Mohammed as the reason for their actions.

Yet, the fact that their actions were reprehensible does not eliminate the offensive nature of the cartoon. Just because something is labelled as satire does not mean it is appropriate to print. Furthermore, regardless of political or satirical intent, there is a condemnable continuing theme of racist portrayals of ethnic minorities, and a particularly offensive focus on Islam in Charlie Hebdo’s satire. One of the defences of this is that the magazine, due to its typically French and extremely secular approach to politics and religion, also frequently satirises the Pope.

Yet, due to his position as a white European, the satire condemning his position, power and religion, is more generally applied to Catholicism as a whole and what he personally does as the current head of the Church. You cannot definitively compare Charlie Hebdo’s portrayals of the Pope and the Prophet, as the latter is a long dead, particularly religious figure that plays a significant role in Islam.

We can promote and fight for freedom of the press, and expression, whilst also condemning racist publications that abuse their position as a satirical magazine to publish insensitive and racist content. This isn’t a call for the end of satire, or for the censorship of the press to accommodate religious views, however, there needs to be an awareness of the appropriateness of what we are publishing and consuming.

As well as a realisation that, whilst many cartoonists may be dismayed at this artistic ‘censoring’,  there are still societies in which people do not  have the right to freedom of expression in their own homes.