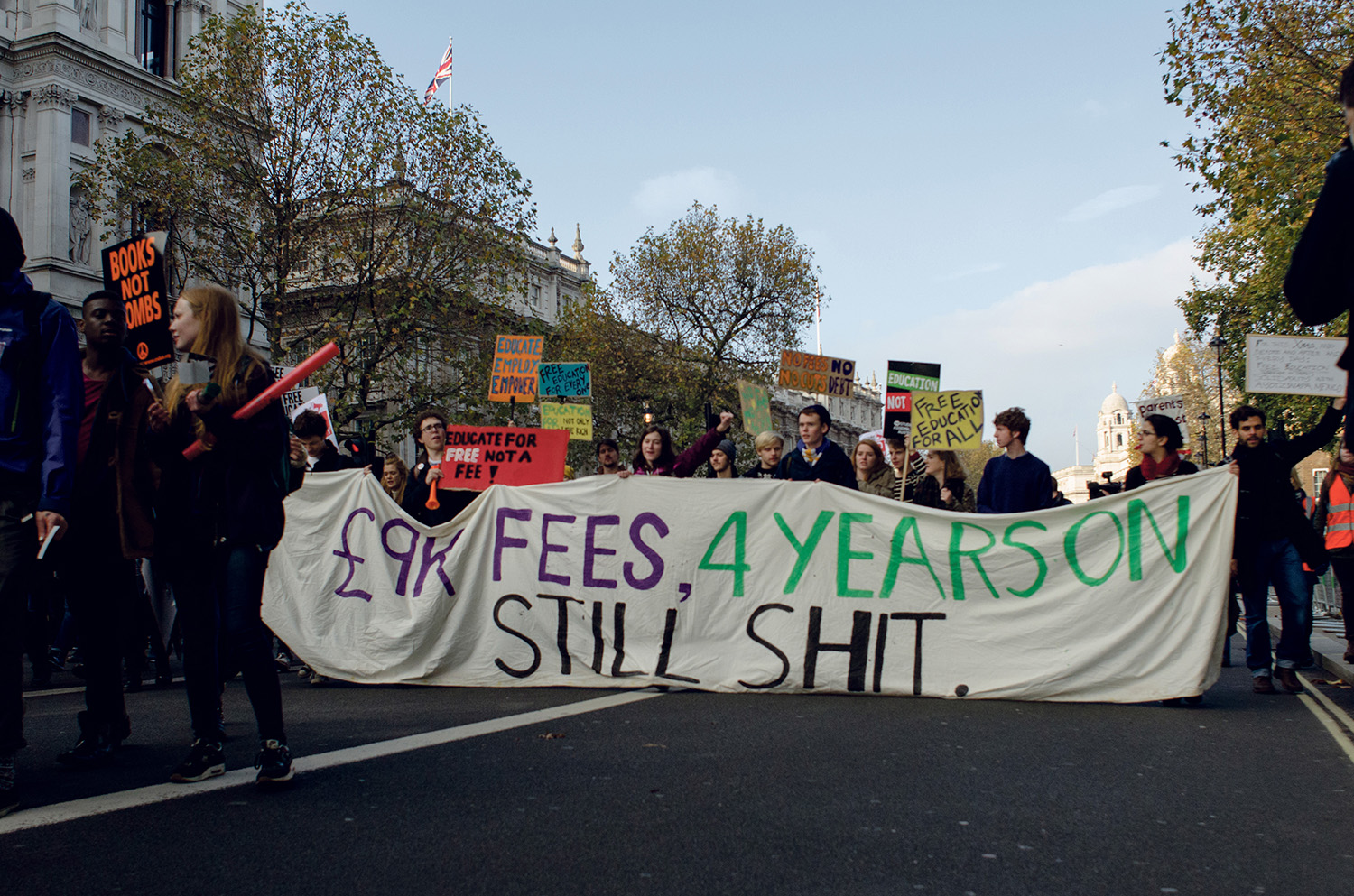 Education should be free, not just for the bourgeoisie

By Alex McDonald on 2nd December 2014

Reflections from the front line of the Free Education March

The Free Education march, organised by NCAFC, took the abolition of tuition fees as its main demand, but the call for a free education goes so much further. It includes inward-facing criticisms of a university culture which is increasingly committed to commercialisation and big business, outward-facing criticism of general employment prospects after university which create a feeling that university ought to be preparing students for employment in a quantifiable way in the first place,  and possibly most important – yet most often overlooked – opposition to the effect which government policies, such as scrapping EMAs and allowing apprentices to be paid as little as £2.73 per hour, have on the prospects of people in all forms of education.

On the march, along with the obvious question and answer “What do we want? A free education!’” students chanted “People before profit”, “We’re here, we’re queer, we can’t afford nine grand a year”, and “Students and workers: unite and fight!” These slogans put the march in a broader context of solidarity from across society against the Conservative party’s pursuit of endless austerity.

The march began outside the building-previously-known-as-ULU, the site of much of last year’s student protest. Campaigns then had included Save ULU, Cops Off Campus and the successful 3 Cosas organised by IWGB members – the outsourced cleaners and security staff who continue to demand sick pay, holiday pay and pensions. Students from across the country, including a reported 200 from Sussex university, assembled before marching around Russell Square, down King’s Way, past Trafalgar Square and ending in a rally outside the Houses of Parliament. I joined the two or three hundred-strong King’s College block on their Strand campus and we took to the streets as the rest of the march passed by.

The atmosphere was positive and confident as we began marching, with cheers from the public and a reasonable level of policing. The black block – masked anarchist protestors – soon ran down the side of the march to join us. In typical style, they were more confrontational and weaved through cars, but also offered a burst of energy with their chant “anti-capitalista”. Nevertheless, the majority of protestors stuck to the prescribed route and refused to be drawn into the block’s antics.

Only in the last hundred meters did the march begin to lose its otherwise cohesive message for a free education. As we passed Parliament Square, those who favour direct action jumped the fences which had been erected following the farcical police crackdown on Occupy Democracy last month before heading to the Department of Business, Innovation and Skills and Scotland Yard to stage sit-ins. Marshalls and other protestors tried to make sure the march continued to its final rallying point, but the allure of confrontation was inevitably too strong for some. It is my suspicion that, just as the police plant liaisons officers whose ‘friendly banter’ provokes indignation and pushes protestors into behaving in ways they don’t set out to, there were a small number of charlatan marchers who pushed the rest into direct action.

Despite the schism, a far greater number did stay for the rally, which included speeches from Green and Labour MPs, SU presidents and 6th Form Colleges. The speeches were inspiring and convincing, and focused on questioning the government’s priorities for spending and taxation, given the number of reported cases of tax avoidance by the most profitable companies despite those who have the least money finding themselves with increasingly less of it.

The next Free Education actions planned include simultaneous marches in every university city on the 6th December as well as a walk-out on the 3rd December. However, the campaign should be placed within a broader context of dissent heading up to the general election, with the main focus being on pushing all party rhetoric away from austerity and unchecked profit and towards the interests of the average people who elect parties in the first place.